IND vs PAK Prediction: Who Will Win The Match Between India And Pak? 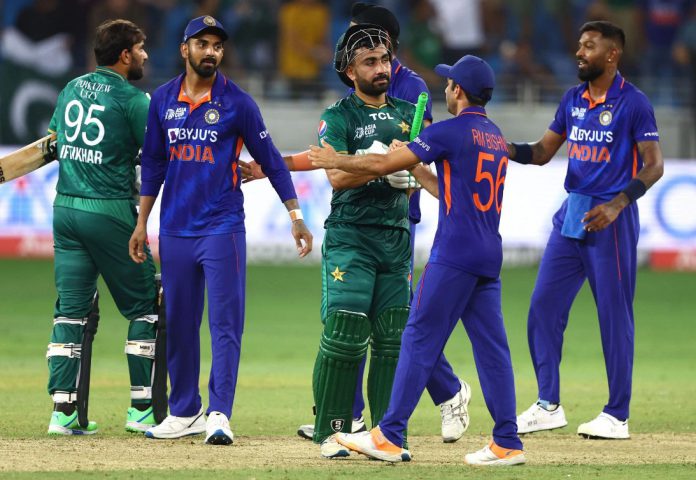 Another tantalizing match between the two arch-rivals, India and Pakistan is about to take place on Sunday. The game is going to be the opener for both teams. The anticipation for the game is constant, and the supporters of both teams turn this match into a carnival. Let us look at IND vs PAK Prediction in detail.

Both teams are placed in the same group and have had their fair journey to the World Cup. They have won a series and had to face losses too. What cooks up in the match will be interesting if rain gods allow the matches to take place.

What to expect from India?

Talking about the Indian team, we can expect the same team which was used during the warm-up match against Australia to play against Pakistan. In place of Pant, Dinesh Karthik can be seen playing as a wicket-keeper batsman in the team. while the Indian team can go with 5 main bowlers, while Hardik Pandya will be available as the sixth bowler of the team.

While Yuzvendra Chahal is set to play as the main spinner of the Indian team, there can be a war between Axar Patel and Ravichandran Ashwin as the second spinner. In fast bowling, Mohammed Shami, Bhuvneshwar Kumar, and Arshdeep Singh can be seen bowling.

What to expect from Pakistan?

On the other hand, Shaheen Shah Afridi has returned to the team fully fit for the Pakistan team. He was out of the team for 3 consecutive months due to a knee injury. If we do not see runs coming from Khushdil Shah’s bat for Babar Azam’s team, then Shan Masood can join the team in his place.

India lost to Pakistan for the first time in World Cup history in their last encounter in the big tournament in the previous season. This resulted in India’s elimination. Pakistan has an edge over India if we talk about head-to-head in the recent past. They carry a winning momentum over India and thus Men in Blue should prepare themselves for some intense competition from the neighboring team.

Talking about the pitch of Melbourne, there is often a good balance between bat and ball here. The fast bowlers get a good bounce and bounce in the early part of the match but the spinners do not get much help, so the spinners also see less roll. The weather in Melbourne remains cool at this time and the temperature can be seen between 9 to 19 degrees.

IND vs PAK: Players to watchout for

KL Rahul and Suryakumar Yadav will be the batters to watchout for. They are in good form and likely to continue their power-packed performance. Virat Kohli will play a crucial role in the match as an experienced player. Shami and Bhuvneshwar Kumar will be important in the bowling department.

For Pakistan, the usual duo of Babar and Rizwan will be the most crucial for the batting department. In bowling, all eyes will be on Shaheen Afridi who is making comeback to the team after 3 months. Haris Rauf will be another pacer to keep faith in.

IND vs PAK: Who will win?

The contest between both team is never not intense. Both have dominated in the recent series they have played. In terms of the teams, Shaheen Afridi’s comeback has Pakistan looking quite composed. Additionally, a couple of batters in the middle of the order contributed to the just-finished tri-series in New Zealand.

The absence of Bumrah gives the Indian death bowling a lot to think about, although Shami showed some promise against Australia in the warm-up match. Both teams have their fair share of strengths and weaknesses and at this point, it is difficult to anticipate the favorites. The fans should fingers crossed for their favorite team and pray that rain god doesn’t play folly on the match day.