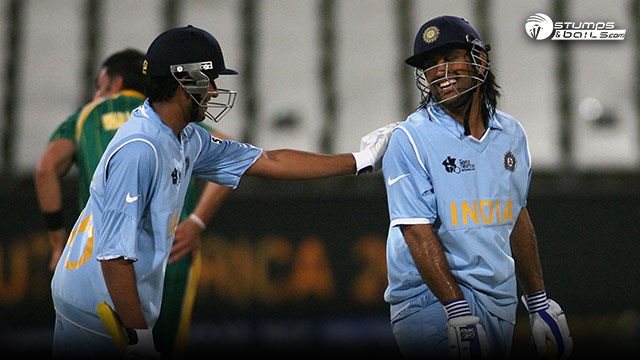 Rohit Sharma all set to begin the T20 World Cup campaign as a skipper of team India for the first time in his 15-year long career so far.

He record as a captain is extraordinary and the 5 IPL titles won by Mumbai Indians under him is enough to describe his calibre as a skipper.

India had won almost every bilateral series under him. But, the T20 World Cup challenge is the biggest of all.

Despite providing plenty of memorable moments to the fans of IPL franchise, Mumbai Indians and the Indian team in any bilateral series, the T20 World Cup win is something everyone is expecting from him to bring home.

India will start their journey on October 23 against Pakistan at the Melbourne Cricket Ground. And before that they will play 2 warm-up games, one against Australia and one against New Zealand.

Rohit Sharma on his journey under MSD

Right before the World Cup campaign, Rohit Sharma shed some lights on his first World Cup journey in 2007 under MS Dhoni.

“When I was picked for that World Cup I did not go with any expectations about myself,” said Rohit.

Rohit also talked about the way the T20 format has evolved over the years while sitting with other captains of teams participating in World Cup 2022.

“It has been a long journey and the game has evolved so much,” Rohit reflected. You can literally see how it is played now compared to what it was like in 2007. 140 or 150 was a good score back then. And now people try and get that score in 14 or 15 overs.”

India after winning the first-ever World Cup in 2007, faced heartbreak in the next three events, where they failed to qualify

In 2014 T20 World Cup played in Bangladesh, India were unstoppable. They were like there to win every game possible and they reached the finals too.

But a loss to Sri Lanka in the finals of T20 World Cup 2014 again broke hearts of millions of fans.

In the next World Cup in 2016, the men in blue reached the semi-finals. While the last year’s World Cup under Virat Kohli was again the disheartening one. India failed to qualify to the semis after losing from Pakistan and New Zealand in the league stage.

Kohli stepped down from the captaincy after the World Cup debacle and Rohit Sharma then took over the charge.

India’s T20 winning percentage under Rohit is 77.75 that somehow assures the fans that this time India may win the cup.