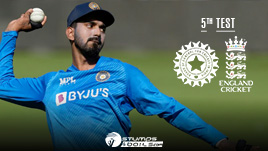 KL Rahul, who is currently missing the ongoing home T20I series against South Africa because of right groin strain, is also a doubtful starter for the Edgbaston Test against England, scheduled to be played from July 1-5. Before the commencement of the T20 series between India and South Africa at Delhi last week, the star batter, who was all set to lead the team in Rohit Sharma’s absence had suffered an injury and was ruled out of all the five T20Is games. 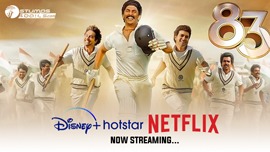 The much-awaited historical movie ‘83’ is going to hit the Over-the-top (OTT) platforms - Netflix and Disney+ Hotstar. The film, that couldn’t meet the expectations at box office, is expected to put up a good show on online market. Ranveer Singh starrer sports drama is directed by Kabir Khan on the true events of India’s incredible 1983 world cup win. The OTT release took place after the Bombay High Court’s verdict on usage of satellite and/or digital media rights. 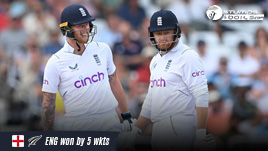 What we witnessed on Tuesday is iconic and should be remembered for a long time. England beat Newzealand in the 2nd Test by 5 wickets. The team has now sealed the series win as they lead by 2-0. Chasing a total of 299, England started with fire. From the over-1 the approach was clear. To hit it big and seal it early. Alex Lees started with fire but after losing his partner, got his innings in control. Losing a couple of more early wickets, England’s desire to finish the game in their favor looked questionable but Bairstow had something else in mind. He came, he saw and he conquered. The batter went on to hit 92 balls 136, an inning that we have not seen in a long time.

Eng Vs NZ 2nd Test: England Winning Hearts All At Once 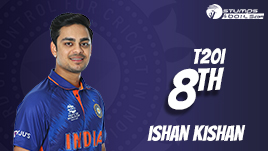 Ishan Kishan, who has made a significant leap in the current ICC Rankings, has become Team India's highest-ranked T20I hitter. The left-handed hitter vaulted 68 spots to eighth place on the elite list and is receiving plaudits from all sides. Kishan made his international debut last year and has only been in a few games thus yet. Let's discuss India's Top T20I Batter. 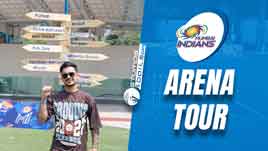 The players of Mumbai Indians had a “dhamaal (blast)” event at new MI Arena launched by the franchise. The captain, Rohit Sharma, along with his teammates had a fun time with players getting involved in activities like futsal, pickle ball, box cricket and others. The team showcased a brotherhood spirit with Rohit Sharma & Co. making fun of each other, smiling all through the dinner time.

Due to a missed flight, Hetmyer is ruled out from the West Indies T20...

Himani Verma - October 4, 2022 0
The Rest of India team won the Irani Cup as they beat 2019–20 Ranji Trophy winner Saurashtra by eight wickets. This is the first...

Indian Legends champions for the second time in a row

ICC set to release ITT for USA, Australia, Canada, and the West Indies

“I don’t think so”: Aaron Finch on Likely Inclusion of Green...

Due to a missed flight, Hetmyer is ruled out from the...