Team Abu Dhabi have just won one game in the four games they have featured in. They will enter the clash against Bangla Tigers with an 8-wicket loss against Northern Warriors. As for Bangla Tigers, they have tasted defeat in three of the five games they have played in the T10 tournament so far. The Tigers lost their previous league outing against Qalandars by seven runs. 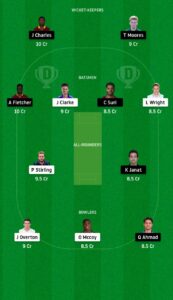 Our TAD vs BT Dream11 match prediction is that Bangla Tigers will win the clash.