Qalandars have been the team to beat this season. They have been in staggering form this season as they have maintained a perfect win record so far in the tournament. Qalandars have featured in five games and have managed to scrape a win in all of them. Qalandars will eye a top spot finish in the group stage with a win over Delhi Bulls.

As for Delhi Bulls, they have grabbed four wins in the five games they have featured in the season so far. Apart from their loss against Northern Warriors, Delhi Bulls have been a dominant force this season. The Bulls have won all their games while chasing. Delhi Bulls will enter the clash against Qalandars as second favorites but they stand a good chance to end their group stage as table leaders. 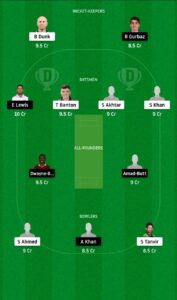