Hawks CC will be up against Falco CC in Match 45 of the ECS T10 Barcelona League 2021. FAL vs HAW is scheduled to be played at the Montjuic Olympic Stadium on Thursday, February 18 at 9 PM IST. Fans can watch the live streaming of the match on the FanCode application. Here are FAL vs HAW Dream11 predictions, Falco CC vs Hawks CC Dream11 preview, FAL vs HAW team, FAL vs HAW squads and predicted XIs.

Falco CC are the team to beat this season. They have maintained a perfect record in the tournament so far. Falco CC have managed to gather a strong batting line-up which is led by Muhammad Yaseen. Falco will be eyeing a spot in the playoff.

As for Hawks CC, they have maintained a decent form on their ECS debut. However, their bowlers have failed to support their strong batting this season. Nevertheless, the Hawks carry enough calibre to reach the playoffs of the season. They will enter the following clash as the second favourites but can inflict an upset over Falco. 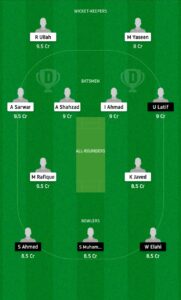 Our FAL vs HAW Dream11 match prediction is that Hawks will win the match.