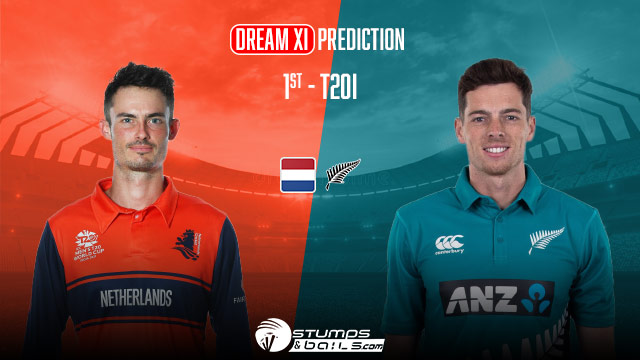 New Zealand is on a European Tour and after the games in Ireland and Scotland, they would next play in the Netherlands. On Thursday, the first game of the two-match T20I series between New Zealand and the Netherlands will be played in The Hague. The chance for players from the Netherlands to access high-caliber competition series is enticing. Mitchell Santner will be in charge of New Zealand, which will be missing a number of its star players. There are enough impact players on both teams to make this a compelling contest.

The game will not be live telecast on any TV channels in India. In India, fans can watch live streaming on Fan Code.

You can track live updates on the Stumps and Bails website.

Only five T20I games have been played here thus far. Therefore, there isn’t much to infer from the data so far in terms of sample size. Nevertheless, the pitch hasn’t had a great track record for scoring. The highest team score is 162, while the average score is only 147.

New Zealand opening players are renowned for their ferocious shots and lengthy knocks. Based on their recent performance, we predict that there will be 45–55 runs scored on the first powerplay. The Netherlands can do some damage early on as well. We can expect a score of 35-40 in the first 6 over.

We can expect New Zealand to score 40–45 runs in the final few overs given that they do have some powerful batsmen who have the ability to alter the game’s outcome with their destructive batting.

To counter the New Zealanders’ bowling, the Netherlands must, on the other hand, maintain their composure and perseverance in the bowling department. The hosts may still score 35 to 40 runs in the last few overs.

Newzealand is a better batting side here and if they bat first any score above 170 is very plausible. For the Netherlands, we may see a score ranging from 140-160.

Who will win Today’s match between NZ vs NED?

Newzealand is coming from a series of victories against the countries that play similar cricket to the Netherlands and are well adjusted to the conditions. Newzealand hence is the clear favorite to win the match given their superior batting and bowling lineup.

Here are the top 3 teams we have for you:

Since New Zealand is playing as a collective, it is challenging to identify standout players. When their batsmen aren’t playing their best, their bowlers step in to win the game. In the most recent game, we witnessed both the hitters and the bowlers giving it their all and winning.

Daryl Mitchell and Martin Guptill appear to be the main New Zealand batters. Max O Dowd  will be an important player for the Netherlands

Ish Sodhi, M. Santner, the Kiwis’ captain, as well as Van Beek and Ryan Klein are anticipated to play significant roles in the bowling department.