MS w vs SS w Dream11 Prediction: The WBBL is preparing for the crucial stage of the league rounds, where each victory alters the dynamics of qualification. Melbourne Stars are currently in sixth place, and their season has changed dramatically since their opening three games, which included three losses. Sydney Sixers are comfortably ahead of the competition in the standings, and a win in this game would put them in first place. With two points on the line, we anticipate a thrilling contest.

The Melbourne Stars have so far recorded under-par totals, and no batter has led their club above the 200-run threshold. With 160 runs, Annabel Sutherland leads the team, while Tess Flintoff and Lauren Hill have also contributed significant runs thus far. This season, J Rodrigues, Capsey, and Garth have yet to produce a clutch performance.

With 10 wickets at an economy of under 7 RPO thus far, Annabel Sutherland is in first place on the bowling standings as well. As of right now, Maloney (8 wickets), Kim Garth (6 wickets), and Sophie Day (7 wickets) have all taken wickets often and with a respectable economy rate. With their all-around abilities, Tess Flintoff and Alice Capsey complete their bowling onslaught.

Their top three run scorers so far this season have been Ellyse Perry (215 runs), Erin Burns (207 runs), and Sophie Ecclestone (230 runs). Although they have played some memorable innings for the club, Alysa Healy (152 runs) and Ashley Gardener (157 runs) haven’t been consistently reliable. They have a good batting order with a lot of powerful batters.

The team has a nice balance of fast and spin bowlers. So far, their bowlers Maitlan Brown (12 wickets), Ash Gardener (14 wickets), Sophie Ecclestone (13 wickets), and Lauren Cheatle (11 wickets) have consistently been in the top half of the wickets column. Up until now, Ellyse Perry and Nicole Bolton have filled the position of the fifth bowler.

MS w vs SS w Dream11 Prediction: When To Watch

The Junction Oval’s pitch appears to be favourable for batting. The ball comes into the bat with ease on this surface, which makes the hitters enjoy their at-bats. When bowling on this surface, the bowlers must be strict with their lines and lengths.

Not the best setting for a cricket match. Melbourne is expected to experience temperatures between 17 and 25 degrees Celsius, with rain on Thursday.

Toss will play a crucial role, as in the last 3 games the batting first team won only single game, while chasing team won 2 games. So, the team wins the toss will most likely to choose bowl first.

Suzie Bates leads the Sydney Sixers in runs scored during this match. She has 230 runs scored at an average of 38.33 in 8 innings, including 2 half-centuries.

In this competition, Ashleigh Gardner has performed remarkably well for the Sydney Sixers. She has played in 9 games, taken 14 wickets—her best stat line being 4 for 23—and scored 152 runs at an average of 21.71.

The Sydney Sixers bowling lineup is greatly enhanced by Sophie Ecclestone. The left-arm spinner, who is 23 years old, has taken 13 wickets in 9 games so far in this competition, with a best of 4 for 17. 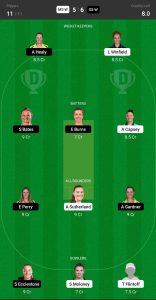 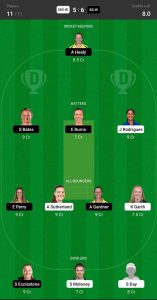 In this competition, Annabel Sutherland has displayed exceptional skill with both the bat and the ball. She has played in 8 games, taken 11 wickets for a 6.78 economy rate, and scored 181 runs in 6 innings, with the highest score being 47.

The Sydney Sixers’ Suzie Bates has scored the most runs so far in this game. In 8 innings, she has 230 runs scored at a 38.33 avg., including 2 half-centuries.

Suzie Bates has performed well thus far in the competition. In eight innings, she has driven in 230 runs for the Sixers. She is one of the most harmful hitters currently playing and is difficult to stop when she is in the zone.

With the bat, Ellyse Perry has also had a respectable season. She has played seven times and scored 215 runs, a remarkable average of 43.

Surprisingly, Sophie Ecclestone has had a mediocre season thus far, but her latest performance has been excellent. She can change the course of the game and is a true matchwinner for her team. Ecclestone is likely to perform well against the Stars.

For the Stars, Sasha Maloney has shown some promise with the ball. She has taken eight wickets for the club, and in a somewhat depressing season, she has been one of the team’s bright spots.