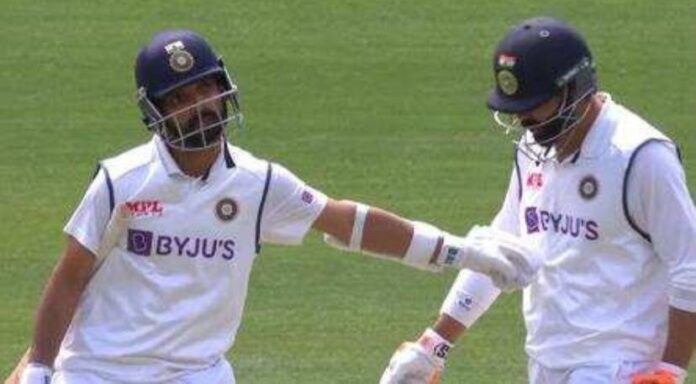 Ajinkya Rahane displayed great character while leading the Indian side in the absence of Virat Kohli. 32-year-old Rahane fabricated a decisive 112 runs off 223 balls in the second Test against Australia in Melbourne. The deputy skipper could have harmed the Australians more if not for his unlucky run out in the first innings. Nevertheless, even the run-out couldn’t hamper Rahane’s spirit. Rahane, while walking towards the pitch, was seen motivating Ravindra Jadeja to bolster India’s innings forward. Rahane’s heroic gestures made him an internet gem within no time.

IND vs AUS: Rahane falls short off the crease

Just then stand-in skipper Rahane fell prey to an avoidable run out earlier in the day. Jadeja, who was batting on 49, placed Nathan Lyon’s ball on the offside and tried taking a quick single. To Rahane’s despair, the skipper failed to make it to the other end by inches. Nevertheless, the skipper didn’t lose spirit as he patted Ravindra Jadeja to carry India’s innings forward.

Rahane’s sportsmanship is superb…even Jadeja got him out, encouraged him to continue without any burden. Great gesture!!#INDvAUS

Leading the team and did 0 mistakes, played a captain innings when team needed him the most, and such a sporting gesture after getting runout! @ajinkyarahane88 you’re the reason we are still in this series, Thankyou skipper 💙 #INDvAUS #AjinkyaRahane #indvsaus2020