Hobart Hurricanes and Melbourne Renegades are all set to lock horns in the 35th match of the Women’s Big Bash League at the Bellerive Oval in Hobart on Monday. Let us look at HB-W Vs MR-W Dream 11 Prediction in detail.

Hobart after winning 3 out of 7 currently standing on fifth spot and a win here is necessary for them to remain in knockouts contention.

Melbourne, on the other hand, after starting the tournament with a win, lost 6 games in a row, and win their last game to remain in contention to qualify and they have to face 6 games more, so a miracle may get them through.

The game between Hobart Hurricanes and Melbourne Renegades women will be telecasted on Star Sports Network. Fans will be able to watch the live streaming of HH-W vs MR-W match on Disney+Hotstar app.

The pitch at Bellerive Oval is highly favourable for the batters. After clearing the initial overs by a decent way, batters can score run quickly as the bowl comes nicely onto the bat as the game progresses. Like before, we may witness a high-scoring bonanza on Monday.

According to weather forecast, it will partial sunny throughout the day and the fans can expect an uninterrupted game.

Toss will play a crucial role, as in the last 3 games the batting first team won only single game, while chasing team won 2 games. So, the team wins the toss will most likely to choose bowl first.

After winning the last game to climb up on the points table, the Melbourne side will look to carry forward the winning momentum and will most likely to play with their full strength side. 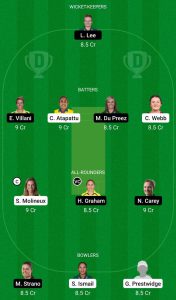 Mignon Du Preez is a well-known player and strong middle order batter. She so far has amassed 154 runs in games at an average of 30.80 at a strike rate of 121.26.

The skipper of Melbourne Renegades is currently in good form and she is really a good all-rounder, who can balance the game with her all-round skills.

One of the main bowlers of Melbourne side Shabnim Ismail has bowled decent in the tournament so far, providing breakthrough at crucial times. She will be a good pick to be in a dream team.

The skipper of Melbourne Renegades played a solid knock in her last game, where she smashed an unbeaten 55 off just 49 to help her side win the game. Apart from a solid batters. She is a handy bowler too.

Heather Graham has performed extremely well in the tournament so far, having scored runs 133 runs in 6 games at an average of 33.25. She played some really good knocks while batting down the middle-order to strengthen her team chances in the tournament.

Out of 14 games played between these two sides, Hobart Hurricanes women won 7 times, Melbourne claimed success in 6 games, while one ended in no result.

We have picked 2 teams for you.