5 Virat Kohli knocks that prove he is the king of white-ball cricket. 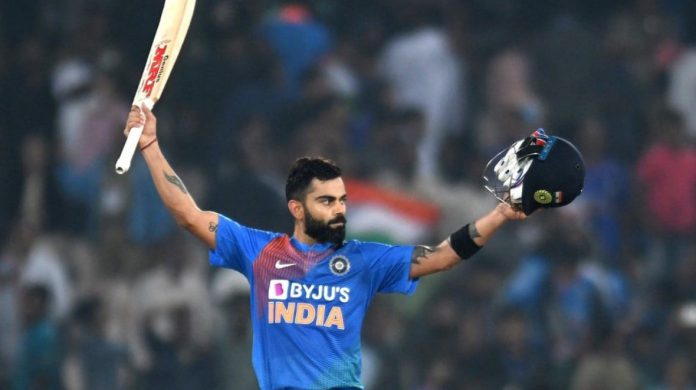 Virat Kohli, the standout batter for Team India. The cricketer from Delhi was always expected to achieve great things. During the U19 World Cup in Kuala Lumpur in 2008, he helped the India U19 team win. He later made his international debut for India in the same year.

The right-handed hitter has played for India in 102 Tests, 262 ODIs, and 113 T20Is thus far in his illustrious career, amassing over 24,000 runs for his country. Due of his achievements, he is frequently contrasted with Sachin Tendulkar, another Indian legend. Tendulkar’s records have already been shattered by a number of players, and Kohli is expected to surpass even more in the years to come.

While he excels as a batsman in all three of the game’s formats, his dominance in white-ball cricket has been on an entirely different level. As the former captain approaches 34, let’s go back in time and examine five of his best limited-overs performances that demonstrate why he is the king of white ball cricket.

Here are 5 Virat Kohli innings that demonstrate why he is the king of white-ball cricket.

Pakistan was considered the favorites to win the match as they batted first and amassed a massive 329/6 in the fifth match of the 2012 Asia Cup in Mirpur. However, Kohli entered the game and produced a fantastic knock. He scored 183 runs in just 148 deliveries to lead India to an easy victory. Thanks to Kohli’s class and performance. Goal that appeared to be impossible to reach was crushed in 47.5 overs.

He smashed 22 fours and a six, contributing to third-wicket partnerships of 172 and 133 with Rohit Sharma and Sachin Tendulkar, respectively. Tendulkar scored 52 off 48 balls (68 off 83). From the minute he stepped up to the plate, Kohli showed incredible form. He scored his hundred in the 30th over by hitting Mohammad Hafeez for a single.

However, the batter was aware that it was still just halfway over. In the 41st over, he continued and hit Umar Gul for consecutive deliveries for four and six. He hit Wahab Riaz for three straight fours in the following over to surpass 150.

When Kohli top-edged a length ball from Gul, his excellent innings came to an end. However, just a few balls later, India easily won.

For his ability to step up his game in the pursuit of difficult targets.Virat Kohli has frequently been referred to as a “chase master.” However, he has also scored some outstanding runs while batting first in limited-overs cricket. In the third game of the six-game series against South Africa in Cape Town in 2018, he scored one of his best ODI scores (160* off 159 balls).

After losing the toss, the Indians were ordered to open the batting. Rohit got away from the guests for a duck. For the second wicket, however, Kohli and Shikhar Dhawan (76 off 63) contributed 140 runs. In yet another brilliant innings, Kohli scored more than half of India’s 303/6 total runs with 12 fours and two sixes.

He played steadily during the first 64 balls of his innings to attain his half-century. Even his century required 119 balls. However, Kohli finally broke his silence in a spectacular way. In practically every over, he hit a boundary. He ended the innings on a high note by smashing the final two deliveries from Kagiso Rabada for six and four, respectively.

In 2012, the legend of Kohli was still developing. A memorable chapter in the story will always be the cricketer’s brilliant counterattack against Sri Lanka in Hobart during the Commonwealth Bank Series. The Men in Blue needed to win this game in order to advance in the tri-series, scoring 321 runs in 40 overs. They completed the task in 36.4 overs thanks to Kohli.

At No. 4, the youthful right-hander entered the batting order and smashed an unbeaten 133 off just 86 balls. He batted brilliantly, hitting 16 fours, two sixes, and a lot of runs. Though Gautam Gambhir chipped in with 63 runs and Virender Sehwag and Tendulkar each scored 30. It was Kohli’s performance that led India to an incredible victory.

He piled on the boundaries while fully aware that India couldn’t afford to let up. Four boundaries in Nuwan Kulasekara’s 31st over of bowling. He then unleashed a rare-occurrence level of savage assault on Lasith Malinga.

The Sri Lankan legend was smacked by Kohli for a six and a four off back-to-back boundaries in the 35th over of the Indian innings. The Men in Blue crossed the finish line in style thanks to two more fours in Malinga’s subsequent over.

Kohli’s brilliant 82* off 51 balls against Australia in the Super 10 match of the 2016 T20 World Cup was one of the best batting performances ever. Quarterfinal in Mohali while India pursuing a difficult 161.

They lost early wickets, and after 14 overs, with Yuvraj Singh back in the hut, they were 94/4. However, Kohli carried India across the goal on his own. With Kohli batting on 50 off 40, the Men in Blue needed 39 runs off the final three overs.

He quickly changed gears and smacked James Faulker for 4, 4, and 6 off consecutive passes. The chasing team had only four runs left to score in the final over after Nathan Coulter-penultimate Nile’s overproduced four boundaries.

In the opening Super 12 match of the T20 World Cup 2022 between India and Pakistan in Melbourne, Kohli once again produced a memorable knock while attempting an apparently impossible chase. Pakistan opened the batting in the chase and produced a formidable 159/8.

Team India then slipped to 31/4. For the fifth wicket, Kohli and Hardik Pandya (40 off 37) scored 113 runs. In the remaining three overs game was in the Pakistan’s side. Kohli, however, was confident that he could succeed. And in what a way! Shaheen Afridi  destroys him for three fours in the 18th over as he warmed up.

He hit two incredible sixes with the final two balls of Haris Rauf’s penultimate over of the innings. Mohammad Nawaz’s final over, a left-arm spinner, required 16 runs. The designated batter hit an important six, and Ravichandran Ashwin scored the winning run by lofting the final pitch over mid-off for a single! King Kohli made six fours and four sixes before returning unconquered.