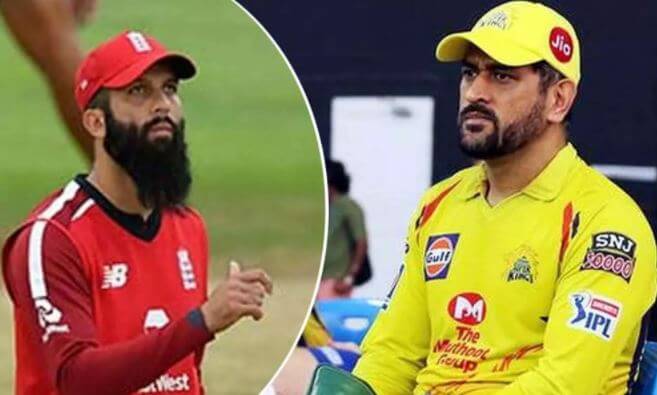 England star all-rounder Moeen Ali has given credits to former Indian skipper MS Dhoni for backing him to bat up the order for Chennai Super Kings in IPL 2021.

Ali was promoted to bat at No.3 for CSK and this experiment has proved to be a masterstroke for the franchise. Moeen Ali has smashed 206 in just 6 matches with an impressive average of 34.33 and a strike rate of 6.16.

Will be surprised if England persist with Dawid Malan as their No.3 batsman in T20Is even after watching what Moeen Ali has been doing for CSK this season.#MIvCSK | #IPL2021

In a recent press conference, Moeen Ali has admitted that it is difficult to bat higher up the order for England.

IPL 2021: “It’s nice to get confidence from captain” – Moeen Ali on MS Dhoni backing him to bat at top-order for CSK

“MS (Dhoni) backed me to bat up the order (for CSK) and play as I play for Worcester. It’s nice to get that confidence from the captain. I get it here (England) as well. But we (England) have got so many world-class players it’s difficult to get up the order. I’m just trying to enjoy my cricket. In the past, I would let that affect me. But I have come to realize that sometimes it is just the way it is.”

Pretty Disappointed, But We Are Winning: Moeen Ali

Moeen Ali has also opened up and said that is he is pretty disappointed to not get a chance to play for the team.

“My role in the team when needed is to try to perform, but at the moment obviously, I’m not being used, not bowling much, not batting much, I have not even played in the T20 and stuff. Obviously, I’m disappointed you want to play, but we are winning, and there’s not much that I can say. Not that I would. There is no argument for me to go and say I need to bat up the order or need to do this and that. When they call upon, I’m ready.”

England is leading the ODI series against Sri Lanka with 2-0 and they are looking for a complete whitewash in the final ODI on July 4th, 2021.

Also Read: BCCI Is Aiming To Add New Franchises, Retain Players And Hold A Mega Auction For The IPL-2022