Ajman are currently on the fifth spot of the points table with only one win in the eight games they have featured in the season so far. Ajman will look to grab a consolation win in their last game of the season.

As for Fujairah, they are on the top of the points table with a dominating perfect record in the season so far. They have emerged victorious in all the eight games they have participated in the season. They will enter the clash as the clear favourites. Fujairah defeated Ajman by 17 runs in the reverse fixture. 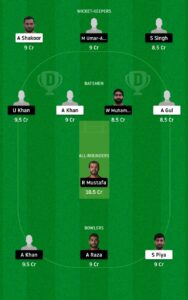