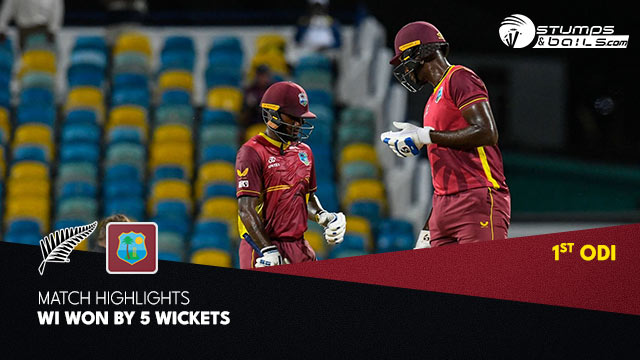 West Indies continued their winning momentum in the white-ball format by defeating New Zealand by 5 wickets in the first game of the 3-match series at Kensington Oval.

After claiming a victory in the final T20I against the visitors, the Caribbean team carries forward its winning approach to take a 1-0 lead in the ODI series.

It was the home team’s bowling combination of pace and spin that dismissed the visitors for 190 in 45.2 overs, and subsequently, with the support of Brooks’ stunning 91-ball, 79 with nine fours and one six gave the much-needed steadiness to carry his team to 193 for five off 39 overs in reply.

Batting first, New Zealand opened to a steady start but as soon as they lost their first wicket, the team collapsed as they 4 wickets down in the span of just 47 runs.

The skipper of New Zealand Kane Williamson scored the highest runs amongst the batters with 34, while Michael Bracewell did a 31-run contribution as New Zealand were bowled out for 190 in 45.2 overs.

Chasing an under-200 runs target, the hosts’ also lost two early wickets, but Shamarh Brooks then took full charge of the game and played a blistering knock of 79 to guide his side towards victory.

Nicholas Pooran also did a decent job by scoring 28 valuable runs and a 75-run partnership with Brooks.

Player of the match – Shamarh Brooks

Shamarh Brooks was awarded the honor of player of the match for his match-winning 79 runs knock that guided the hosts to a comfortable victory over New Zealand by 5 wickets.

The second match of the 3-match series will be played at the same venue on Friday.