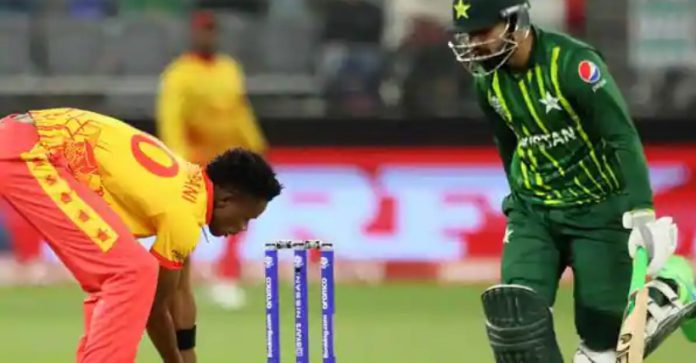 Team Zimbabwe clinched the win in the marquee event by defeating the Pakistan side by 1 run. In the 24th match of the ICC T20 World Cup in Perth on Thursday.

Opted to bat, Zimbabwe posted 130 on board, courtesy of some brilliant batting display by Zimbabwe batters And then bowlers maintained the momentum by restricting the Pakistan batters for just 123 for 9.

Sean Willams played a knock of 31 runs adding to the total score followed by the openers on Zimbabwe Wesley and Craig Ervine scored 17 and 19 runs each. The skipper Craig Ervine Could not be not the crease for so long but his captaincy is reflecting in the team’s overall performance. Also, they made an average total of 130.

Zimbabwe has started their campaign by losing against Ireland on board in the opening match. Things are not easy for this underdog team despite of having a good line up in bowling and batting. They are not in the tough game.

Pakistan batters gave a good star to the innings and the bowlers as well restricted the Zimbabwe Batters. They made 129 by losing 8 wickets after playing 20 overs. Pakistan will not be satisfied by the batting performance of the lineup.

As it is seen that after the three top order batsman is walked out. After then Pakistan is not backed up by the other batters in the lineup. Where Mohammad Rizwan (14), Shan Masood (44), Mohammad Nawaz (22) was the major scorer of the innings.

Talking about the Bowling side of Zimbabwe who made the Pakistan batters struggle to make the small total of 130 in 120 balls.

Major Wickets were taken by Neil Evans and Sikandar Raza who took 2 and 3 wickets in the innings and made a good come back in the game.

As the Pakistan trio also made the impact on the Zimbabwe batters. But all the efforts went into vain as it was tough collision al together.

However, in today’s match its was seen that there was a batting failure in the Pakistan side. This Win will boost up the moral of the Zimbabwe team for further matches.

The Pakistan played their full 20-over quota and recorded 129, but lost the match by 1 run.