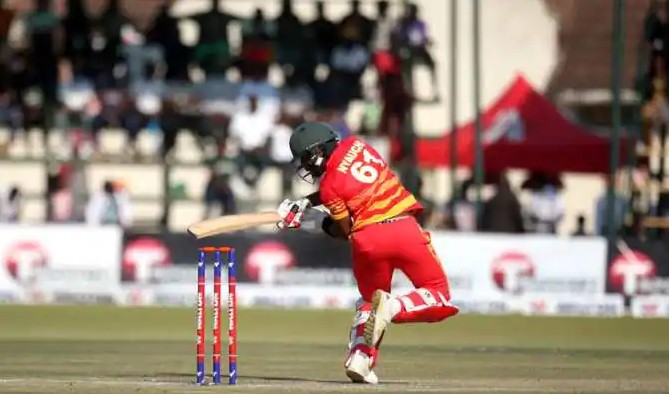 In the forthcoming ODI series against India, Zimbabwe’s wicketkeeper-batter Regis Chakabva will continue to serve as captain while regular skipper Craig Ervine is still recovering from a left hamstring injury.

Wellington Masakadza, a left-arm spinner for Zimbabwe, will also be out with a shoulder tendon injury against India. Zimbabwe released their 17-member squad on Thursday. Fast bowlers Blessing Muzarabani and Tendai Chatara are still out of commission after missing the T20I and ODI series against Bangladesh due to a torn thigh muscle and a broken collarbone, respectively.

In the just finished ODI series against Bangladesh, which Zimbabwe won 2-1, Chakabva, who made his Zimbabwean debut in 2008, took the helm for the first time. Additionally, he helped the hosts win the series with a game-winning 102 in the second ODI. Sikandar Raza, a senior all-rounder, was named the Man of the Series for his 252 runs and five wickets in the third and final ODI against Bangladesh. Chakabva was unable to play because of a hand sprain.

The three-match series against India, which is a part of the ODI World Cup Super League, is set to start on August 18 in Harare.

All three One-Day Internationals will be held at Harare Sports Club, where the hosts are riding high following a thrilling 2-1 victory against Bangladesh. India automatically qualifies for the World Cup by virtue of being the host, despite the fact that the series is a crucial one for Zimbabwe since finishing in the top eight on the Super League table guarantees entry to the World Cup.