Islamabad United will be up against Quetta Gladiators in Match 18 of the Pakistan Super League (PSL) 2021. The match will be played on Friday, June 11 at 9:30 PM IST. Here are ISL vs QUE Dream11 predictions, preview, team, predicted XI, and full squads.

It was a tough day for #RedHotSquad🦁 but a true champion is not only formed in victory. To be defeated makes you learn.

Earlier this week, Lahore Qalandars got the better of Islamabad United despite a brave bowling performance from the United bowling line up. Nevertheless, the United side will look to bounce back in an orderly manner. Colin Munro and Usman Khawaja will lead the Qalandars in the batting department.

As for the Queta Gladiators, they will be playing their first match of PSL 2021 in the UAE. Gladiators are currently on the bottom spot of the points table. However, they have a couple of heavyweights in their side in the name of Andre Russell and Jack Wildermuth. Faf du Plessis will open the batting for the Gladiators. 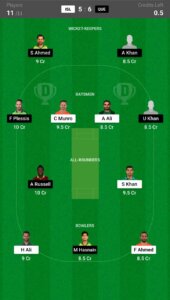 Our ISL vs QUE Dream11 match prediction is that Islamabad United will win the match.