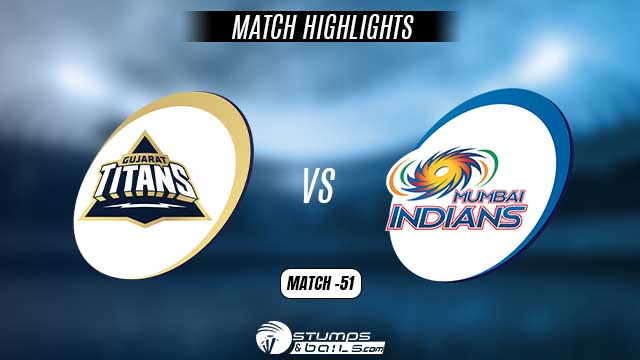 Mumbai Indians defeated Gujarat Titans by 5 runs in the 51st match of IPL 2022 at the Brabourne Stadium on Friday.

Chasing a target of 178, Gujarat Titans witnessed a solid start as both their openers Shubhman Gill and Wriddhiman Saha were in the mood to end the match quickly.

The openers added 106 runs in 73 balls before Murugan Ashwin ended Shubhman Gill’s inning with his flighted delivery. Gill scored 52 runs in 36 balls with the help of six fours and two sixes at a strike rate of 144.44.

In the last ball of same over, Murugan Ashwin gave MI another breakthrough when he dismissed the second set batter, Wriddhiman Saha (55 off 40).

Three overs later, the Titans lost the wicket of Sai Sudharsan as well. The 20-year-old batter managed to score 14 runs and got dismissed by Kieron Pollard. But then Hardik Pandya and David Miller assisted Gujarat to reach the target.

Skipper Hardik Pandya, who came at no.3, played a quick knock of 24 runs off 14 balls at a strike of 171.43 but got run out in the 18th over, while Miller, who enthralled everyone with his superb batting technique many times before as well, failed to create the same charisma this time as Gujarat lost the game by 5 runs.

The game got tensed in the final over as Gujarat required 9 runs of the final six balls, with Miller and Tewatia at the crease. Miller took a single on the first delivery, Tewatia missed the second ball and was run out on third while collecting the second run leaving everybody to bite their nails. Rashid Khan then took a single on the fourth ball and let Miller face the final two balls, but the slower balls outside off stump strategy of Sams worked like magic as Miller missed both the final two deliveries to hand Mumbai their second win of the season.

Earlier, Mumbai Indians got off to a flying start courtesy of superb knocks from the skipper Rohit Sharma and the young gun Ishan Kishan, both contributed 74 runs for the first wicket before the spin master Rashid Khan got rid of Rohit Sharma. The MI captain was looking in good touch and was playing at 43 in just 27 balls when he tried to reverse sweep against Rashid and got trapped.

Suryakumar Yadav, who scored the highest run for Mumbai Indians so far this season, futile to help his team as he got out cheaply at just 13 runs. Soon after his wicket Ishan too walked back too pavilion after Alzarri Joseph trapped him in his slower ball. Kieron Pollard once again failed miserably.

Player of the match – Tim David

Mumbai are currently on bottom of the IPL 2022 Points Table with 4 points from 10 games, including two wins and eight defeats.

Can Hardik Pandya replace Rohit Sharma as the T20 captain of team India?