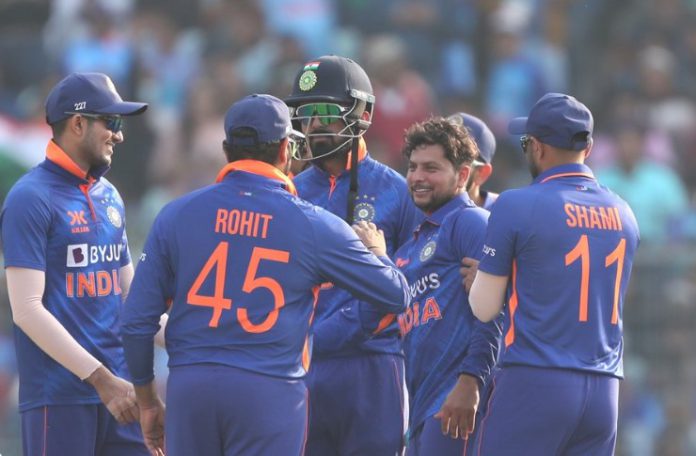 A solid knock from KL Rahul under pressure. India won by 4 wickets. He did not have a lot of runs behind him going into the contest but Rahul played an incredible inning.

Kuldeep Yadav hits the winning runs for the hosts. A gritty unbeaten 64-run knock from KL Rahul takes India home. Another series win for Rohit Sharma and co. Chasing 216. India crosses the finish line in the 44th over and with 4 wickets in hand.

India lost four wickets early in the chase but Rahul along with Hardik Pandya helped India recover and got back the chase on track.

Kuldeep Yadav and Mohammed Siraj picked up three wickets each as India bowled out Sri Lanka for a lowly 215 in the second ODI in Kolkata. Nuwanidu Fernando (50) was the top scorer

After the collapse of the batting lineup of the Indian side, the Kl Rahul and Axar Patel took the charge of taking the game to the last, but axar lost the wicket to Dhananjaya at 21.

Chasing a modest 216, India openers Rohit Sharma (17) and Shubman Gill (21) started off swiftly but then the hosts lost wickets in a flurry, courtesy some tight bowling by the Lankans. Virat Kohli went for 4, while Shreyas Iyer too departed for 28 putting India in spot of bother.

However, Rahul along with Hardik Pandya (36) then forged a crucial 75-run partnership to bring India out of the troubled waters and put chase back on track. After Hardik’s departure, in-form Axar Patel (21) cracked a few blows taking India closer to the target. Rahul along with Kuldeep Yadav (10*) eventually took India home in the 44th over.

Sri Lanka aimed to bounce back and draw level in the series to ensure the series is alive. Sri Lanka Won the toss and choose to bat first.

Both have moved swiftly between the wickets along with collecting boundaries at regular intervals. A well-compiled fifty for Nuwanidu Fernando on debut. He raises his half-century off 62 balls. A terrific knock this has been from Nuwanidu so far.

Kuldeep Yadav triggered a middle-order collapse after a solid second wicket 73-run partnership between Nuwanidu Fernando and Kusal Mendis as India restricted Sri Lanka to a par 215 in the second ODI in Kolkata.

Making his comeback in place of injured Yuzvendra Chahal, Kuldeep (3/51) picked up three crucial wickets in the middle overs. Breaking Sri Lanka’s back completely after a decent start.

At one stage, the Lankans were reeling at 126 for 6 but contributions from the lower order took them to a respectable total. Nuwanidu Fernando (50) scored a solid half-century at the top on debut. But could not convert it into a big score as he got run out after a horrible mix-up.

Last-match hero skipper Dasun Shanaka (2) also flopped and was one of the victims of Kuldeep. Wanindu Hasaranga (21), Dunith Wellalage (32), Chamika Karunaratne (17) and Kasun Rajitha (17) chipped in with useful contributions down the order for Lanka. Apart from Kuldeep.

Tribute to Pele during 2nd ODI

Pele, the legendary football player who passed away on December 29, 2022. He gets honored on Thursday during the second ODI match between India and Sri Lanka at the Eden Gardens Stadium in Kolkata. During the second match of the current three-match ODI series between India and Sri Lanka. Footage of Pele’s skills will be shown on the enormous screens at the Eden Gardens.

IND vs SL: The third ODI will be played on Sunday in Thiruvananthapuram.