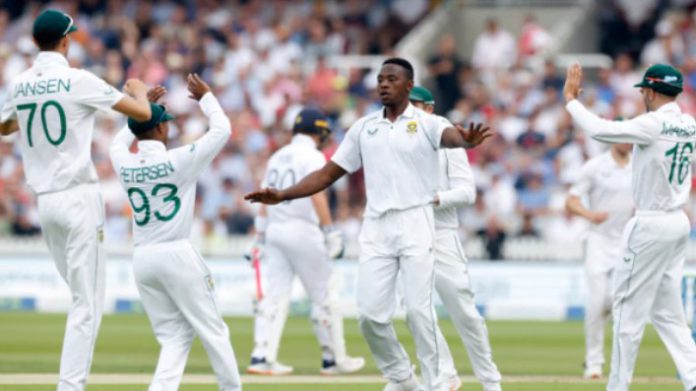 South Africa concluded Day 2 with a lead of 124 and is in control of this Test match after a 72-run stand between the two for the seventh wicket. The hosts quickly lost a number of wickets in the evening session, while South Africa quickly gained control with favorable batting conditions.

You yearned for more on the first day. Not only because there were only 32 overs of play, but also because of what transpired over those two hours. Despite the extremely favorable bowling conditions, Ollie Pope managed to hold his own as South African fast bowlers chipped away at wickets at the other end.

Ben Stokes put on a typically talismanic performance as the home team tried to Baz-brawl their way back into contention, but South Africa found contributions from all sides and maintained the lead on day two at Lord’s, confounding the hype surrounding England in the lead-up to this Test.

England scored only 45 total overs. On the second day, 13 overs were bowled, and five wickets were lost. Kagiso Rabada, who was the greatest bowler on display, picked up a five-wicket haul and earned a spot on the coveted honours’ list, which comes as no surprise to anyone. Such a superb athlete. All throughout the innings, he was at the top of his game, mixing up his deliveries and bowling clean lines.

For Dean Elgar, it was a good start as he w as given a caught behind but was able to carry SA at 27/0 to lunch on the second morning by successfully using the DRS.

After lunch, the game was losing steam for England, but Anderson, who had not previously entered the attack, came in and struck in just his second over of the term, breaking an explosive opening stand of 85 runs. Elgar was unfortunately out after a ball deflected off his leg and rolled back onto the stumps; still, England will take it!

Following the trend, the second afternoon at Lord’s was comparatively unremarkable. Although there were no disastrous batting performances, outstanding bowling performances, or unpleasant weather, it didn’t imply that no team won. Going to tea, South Africa was in complete control at 158/2, trailing the first innings score by just seven runs.

Erwee was knocked out by Stokes, who then caught Rassie van der Dussen directly in front. and made such an impression that Rassie brought a review to the pavilion with him. He is directly behind the crowd at Lord’s, and the sun also disappeared.

Then Stuart Broad arrived to the party. At Lord’s, Verreynne became Broad’s 100th wicket. He got one to keep its line and bounce after setting up the batter with a straight line. basic, with an edge behind. Although South Africa had the advantage, the winds had suddenly shifted.

Day 2 ended with South Africa at 289/7, having bowled England out for only 165 earlier in the day, giving them a crucial 124-run advantage.