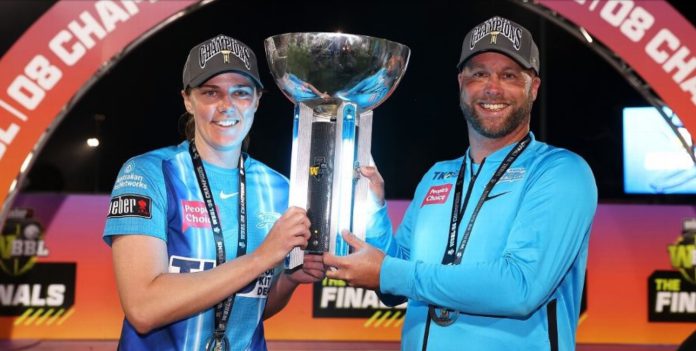 Adelaide Strikers are the new WBBL champions after two final losses in the previous three seasons following a thrilling triumph over Sydney Sixers at North Sydney Oval. Strikers clinching the team’s maiden WBBL championship with an outstanding bowling effort that shocked the hot favorites Sydney Sixers on their home field.

Deandra Dottin, a Windies all-rounder, was the star with both the bat and the ball. She scored an unbeaten 52 off 37 balls to help her team reach 7-148 before capturing the crucial wickets of Suzie Bates (10) and Ashleigh Gardner (0) to start a top-order collapse.

Australian fast bowler Ellyse Perry (33) and Nicole Bolton (32) attempted to save their pursuit, but the Strikers were unstoppable when Brown (2-15) and Dottin (2-30) left the Sixers top-order in shambles at 4-16. The final ball of the innings saw the Sixers being bowled out for 138.

After the Strikers’ tragic loss to the Scorchers in the final of the previous year. Now this brought a historic 10-run victory in front of 6,478 spectators at North Sydney Oval and concluded their fairy tale of recovery.

This year, Tahlia McGrath has won the Ashes, the ODI World Cup, and a gold medal at the Commonwealth Games. After two traumatic close calls, she can now add a WBBL championship to that list.

“That’s a tough one, it has been a good run, This one is special for different reasons. My home state, something I’m very passionate about, been there since day one. This one is pretty special. There’s World Cups, there’s Commonwealth Games, but this is special for different reasons. This one has been a long time in the making. When you get so close so many times, you keep the same group together, you keep fighting and you finally get one. So this one is pretty special.”

He concluded by saying “We walked off thinking it was a little below par but at the same time, there was enough in the wicket if we were disciplined enough, subtle changes of pace, and the best bowling attack in the league. It’s never ideal dropping catches but, again, we just stayed calm. Our bowlers were amazing. I would back us to defend any total and once again they did the job today.”

A great season for Adelaide Strikers in this Women’s Big Bash League 08. They played really well during the group stages and they performed really well to win the championships this year around.