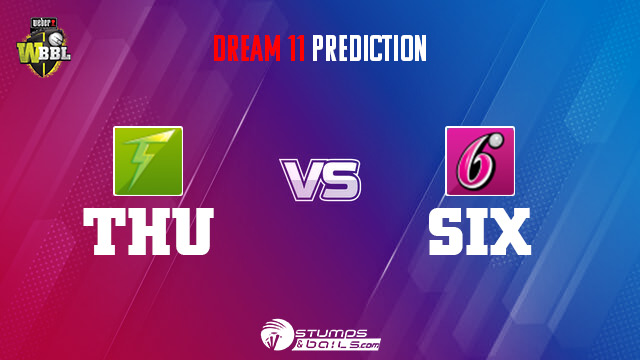 SS-W and ST-W Dream11 on Saturday, the Women’s Big Bash League’s 27th derby will take place in Sydney on November 2nd. At the North Sydney Oval, Sydney Thunder and Sydney Sixers women will square off. Eight teams will compete in the tournament’s eighth iteration, which will consist of 59 round-robin matches before the knockout finals.

One of the three most successful teams in the competition, Thunder, captained by Rachael Haynes, has won two championships thus far. Only one of the team’s seven games to date has ended in victories.

On the other hand, the Sixers are experiencing success in the WBBL 2022. With just one loss on their record, the team is ranked first in the points table.

The Sydney Sixers Women have only lost one game in five games this WBBL season.

SS VS ST: WHERE TO WATCH LIVE:

The game between Sydney Sixers and Sydney Thunders will be telecasted on Sony Sports Network. Fans will be able to watch the live streaming of the SS Vs ST match on the Sony liv app.

The North Sydney Oval in Sydney has a balanced surface that is more suited for pacers. In the last five games played there, the average first innings score was 138, while the overall average was close to 137. 60% of the teams at the site that bowl first have won the games. Additionally, 80% of the captains at the location elected to bowl first after winning the toss. In addition, forecasters expect that it will be cloudy and hover around 18.1° Celsius on matchday.

SS VS MR: WHAT TO EXPECT IN MIDDLE

The Sydney Sixers are in excellent form and will relish getting to bat first. 40 to 45 runs for the team in the first six overs are possible. Sydney Thunders may score between 30 and 35 runs.

SS VS MR: DEATH OVER SCORES:

Captains: Alyssa Healy and Suzie Bates can be the choice.

Also, Ash Gardner and Phoebe Litchfield can be vice-captains for the fantasy picks.

SS VS ST: WHO WILL WIN THE MATCH?

We predict a one-sided battle because the two teams’ seasons have been so radically different from one another. Sydney Thunders’s Women have performed very poorly, whereas Sydney Sixers Women have earned their place at the top of the standings.

We predict another victory for Sydney Sixers Women.