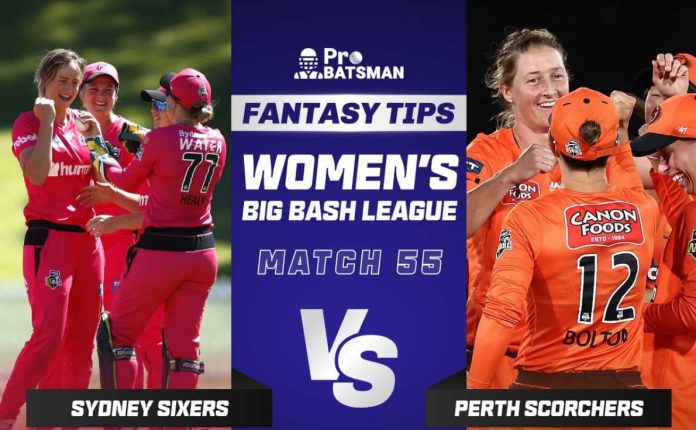 Sydney Sixers and Perth Scorchers are ready to lock horns in the 31st match of the Women’s Big Bash League at the Lilac Hill Park on Saturday.

The Sixer led by Alyssa Healy are currently standing on top of the table with 12 points in 7 games and they look to maintain their winning momentum when they walk into the field to face Perth on Saturday.

Perth, on the other hand, are sitting at third position with 9 points in 7 games and they will also try to remain in top two at the points table.

The game between Perth Scorchers Women and Sydney Sixers Women will be telecasted on Sony Sports Network. Fans will be able to watch the live streaming of PS-W Vs SS-W match on Sonyliv app.

It’s a quite friendly surface for the batters, while bowlers will find it hard to keep their side in game, fans will witness a good batting bonanza at this pitch.

Suzie Bates, the third highest run-scorer in the league so far, is the opening partner of experienced Alyssa Healy, who is also in good form and the team will also want them to perform in a good fashion and provide a good start by adding around 45 to 50 in the first six overs. While Perth Scorchers will also try to add at least 45 on board during the powerplay overs.

Both the teams having power packed hitter in their side and already dominating the league with their brilliant batting in the final few overs. Elysse Perry and Erin Burns for Sydney, while Marizanne Kapp and Amy Edgar for Perth hold the ability to turn the tables towards their side at any point. Considering that one might assume that Sydney may put 40 on board during the death overs. While Perth may score somewhere in the range of 35 to 40.

Sydney Sixers are currently maintain a gap with other at the points table after losing just 1 game in 7, and going per their current form it is very hard to beat them, as they will most likely to dominate in this match too.

For Sydney, Suzie Bates, who is currently the third highest run-scorer in the tournament with 208 runs in 7 games, is handling the opening responsibility for Sydney alongside Alyssa Healy. She is in good form and is most likely to perform well in this game too.

For Perth, Alana King is performing well, she overall took 8 wickets so far in six games for her side.

Sydney Sixers women and Perth Scorchers women have faced each other 16 times in the Women’s Big Bash League, in which Sydney claimed victory 8 times, while Perth also tastes success in 8 matches.