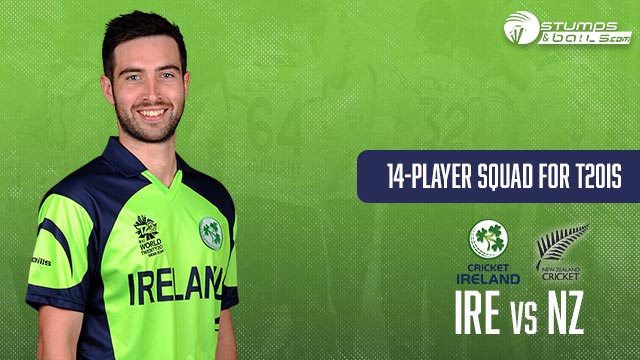 Ireland has announced has a 14-member squad for the New Zealand series.

The runners-up of ICC T20 World Cup 2021 T20 are set to meet the Ireland side in Belfast in a three-match series later this month after their three ODI games at Malahide. Selectors didn’t made any changes in squad and have kept faith on the same squad that faced India in a two-match series last week.

They did a great job while facing the mighty India in a two-match T20Is in last week of June. However, they lost both the games but they played against a big side presented their calibre in front of the world. They had almost chased down the huge target of 226 set by India in the second T20, falling just four runs short.

What Ireland Cricket board said about the selection?

“Naturally, the Selectors are backing the players that performed well against India. The high standards we sought were delivered upon. And we hope the squad can put in similar performances against New Zealand.” said Andrew White, Ireland’s Chair of National Men’s Selectors in a statement released by Cricket Ireland.

“The second T20I against India was a superb spectacle for the fans. But I know the coaching staff and players were gutted not to get across the line.” White said.

In the first T20 too, they posted a good total of 108 runs on board in a rain-restricted 12-over game.

Ireland’s star batter Andre Balbirnie will continue to lead the Irish side in another tough series.

The action between Ireland and New Zealand starts from July 10. First both team will lock horns in a 3-match series at the village in Dublin starting on July 10. After that, they will play a 3-match T20 series at the Civil service cricket club in Belfast on July 18, 20 and 22.