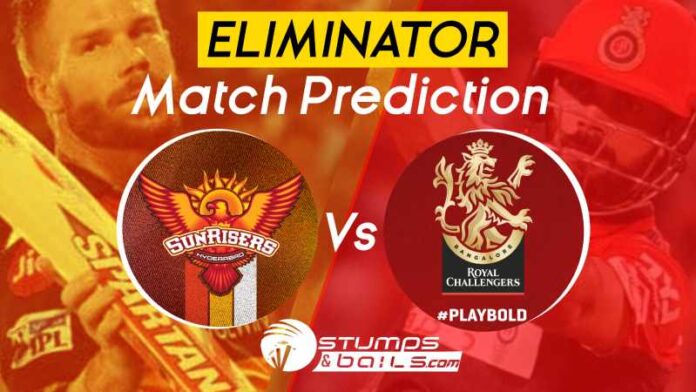 In the second Indian Premier League Qualifier which would be the eliminator of IPL 2020 series, Sunrisers Hyderabad will go head to head against Royal Challengers Bangalore at Sheikh Zayed Stadium, Dubai on 6 November 2020.

In the final, the winner of this game will immediately book a spot for themselves, while the losing team of this match would have a second chance to claim the coveted spot in the finals against the winner of the eliminator.

SRH may just might be tempted to play Jonny Bairstow in place of Kane Williamson, who might prove to be an enforcer in the middle order as compared to Williamson’s role of an accumulator.

If the pitch is similar to one they played against RCB, couple of days ago, they might well go ahead with Shahbaz Nadeem, else they would want to pick Khaleel Ahmed, who provides them a wicket taking option.

They have done exceedingly well this tournament with their last match against CSK being a jarring exception. They would have in fact liked that one of their off-games has come prior to the play-offs and they would be looking to carry forward the winning momentum.

RCB would like to be more expressive with their batting and would love to capitalize during the middle overs where they have been far too conservative this season.

The last match at Sheikh Zayed Stadium ended in a Super Over, where the Knight Riders of Kolkata defeated the Hyderabad Sunrisers. During their 20 overs, both teams scored 163 runs. None of the batsmen could score half a century, while nine out of the eleven wickets that fell in the contest were picked up by the pace bowlers.

Before attacking the bowlers on this surface, the batsmen need to spend some time in the middle. Here are some of the vital stats you need to know from Abu Dhabi ‘s previous T20 games.

The weather will be sunny on Friday, with a daytime temperature of 32 ° c. It is estimated that the night time temperature will be 23 ° c. With no precipitation, it will be dry. The visibility would be about 10 km, i.e. 6 miles, and 1014 mb of atmospheric pressure. With no precipitation and cloud covering 0 percent of the atmosphere, it will be dry, the moisture will be around 46 percent.

In a crucial game like, we expect SRH’s talismanic skipper to come to the fore and put on a show for his team. If David Warner keeps going, it would be difficult to stop him and SRH.

Virat Kohli is the biggest run-getter for RCB and has been in great touch. At an average of 53, he has so far scored 424 runs in 12 matches.

Sunrisers Hyderabad are predicted to win this match.