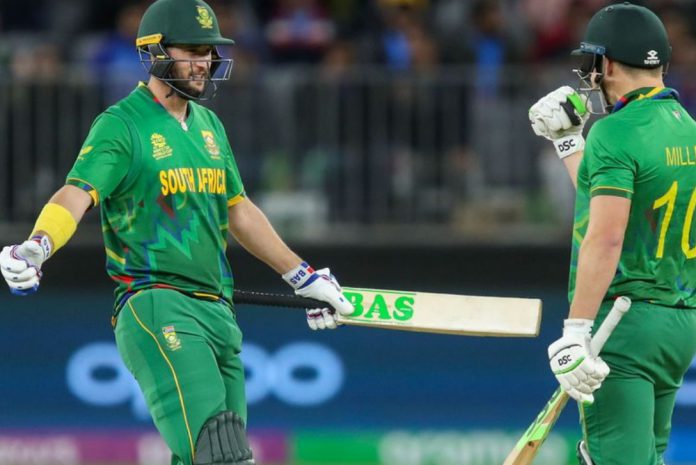 South Africa pulled off an amazing win against the mighty Indian side by 5 wickets after they needed 6 runs in the last over. This win against India takes South Africa to the top spot with five points one point ahead of India from three matches in group 2 of the T20 World Cup.

Lungi Ngidi took 4 wickets in his first three overs, demonstrating how effective the South African pacers were. India has a total of 133 after the 20th over. India was able to score 133 runs in their first innings while losing 9 wickets.

Suryakumar Yadav and Dinesh Karthik took advantage of the occasion, amassing just 73 runs in the final 10 overs. The hitting team was able to score more goals.

South Africa came on to bat with 134 runs to chase with Quinton De Kock and Temba Bavuma. But Indian Pacer was on fire as Arshdeep picked up the two wickets of de Kock and Rossouw in his first over.

South Africa’s second wicket came via an LBW against Rossouw. Arshdeep lacked self-assurance and even made a leg-down gesture. Karthik and Rohit decided to go for the review because they felt comfortable behind the stumps. Ball-tracking shows three reds and the UltraEdge displays a flat line, so the umpire must reverse his call of Not out to Out! Magical Review by Dinesh and Rohit.

Sky to the Rescue

Early on in the match, the Indian Batsman struggled to put up a decent score in the start but Suryakumar came to the rescue as he scored 68 runs off 40 balls with 6 fours and 3 sixes at a strike rate of 170.

South African pacer picked up four wickets in his four-over spell, Lungi Ngidi was at his best and he completely bamboozled the Indian batsman, he gave away 29 runs at an economy of 7.2. Ngidi is in top form and he continued his impressive run against India also. He won the player of the match award for his incredible 4-wicket spell.

South Africa after losing three wickets early on in the innings David Miller and Aiden Markram stood together and stitched up a beautiful partnership, Markram was trying to accelerate and on the other hand Miller anchored the innings until the end with 59 runs of 46 balls. Both the South African player were patient and made sure that South Africa were in contention for the win.

South Africa were in trouble at the start after losing three wickets then came Aiden Markram who was patient and took his time to understand the pace of the pitch and he eventually scored 52 runs out of 41 balls before getting dismissed by Hardik Pandya in the 16th Over.

India will now face Bangladesh on 02 November (Wednesday) at Adelaide. While South Africa will face Pakistan on 03 November (Thursday) in Sydney.