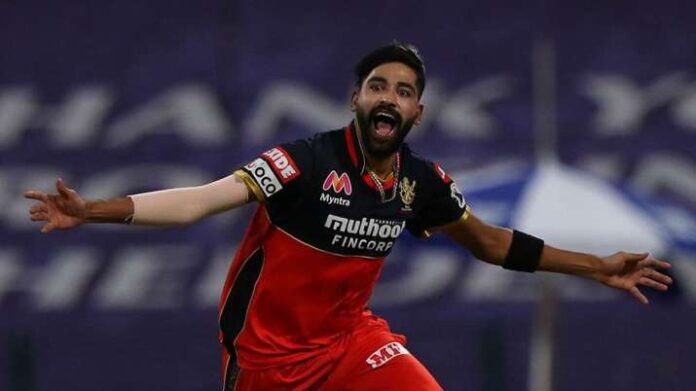 Mohammed Siraj, one of India’s potential speed bowling superstars, had a dismal season in the Indian Premier League (IPL) 2022 with Royal Challengers Bangalore (RCB). Nonetheless, perhaps one of India’s rising fast bowling stars feels he can help the Red Dukes in the fifth and final Test against England.

Siraj finished the most recent Indian Premier League (IPL) season with an economy rate of 10.07 and 9 wickets from 15 outings. Additionally, the fact that he was hammered for 31 sixes, far more than any other bowler in tournament history, was a major source of his dissatisfaction.

Siraj, whose been outstanding for India in Test matches, is motivated to perform well in the final Test match versus England, which will take place at Edgbaston from July 1 through July 5.

My aim is how I can put the opposition under pressure: Siraj

“This season the IPL was a bit down. The last two seasons my graph was up and this time it has come down. But then I see what I have done in the past two years and take that along. This year was a bad phase for me but will make a strong comeback by working hard. I will work on my ability, believe in my strengths”, said Siraj.

Siraj considers that the 5th test match, which had to be delayed owing to the emergence of COVID in the Indian camp the previous year, would be “extremely crucial” in the framework of the World Test Championship (WTC).

“My preparations are going well for the Test. There in England, the Dukes ball is used, it is always good to bowl there in the English conditions and it is helpful for the bowlers,” the 28-year-old added.

“This Test is very important for us and we are leading 2-1. It is good that the Test has been rescheduled and we are confident (of doing well) as we have the lead, it is a good feeling,” added the pacer.

Siraj believes that consistently hitting the same location is extremely vital in the game of Test cricket. “The important thing in a Test match is your line and length and how consistently you can bowl at one spot. That is what I have learned, the same thing I have learned in Australia and my aim is to perform consistently for the team and bowl in one area and create pressure. Even if I don’t get wickets, my aim is how I can put the opposition in pressure,” Siraj concluded.