IND vs SL T20I series: When and where to watch? 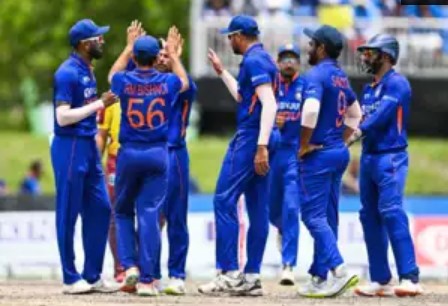 Prior to their hectic 2023, Team India has received a brief break. While they won the second Test match against Bangladesh by a margin of three wickets. It was a year in which India lost another knockout T20 World Cup game. Many different scenarios have been proposed as to how the Indian team might move forward. And what steps might be taken in that direction in the wake of their defeat.

Despite there being no official confirmation as of yet, it appears likely that Hardik Pandya will captain the squad at the upcoming T20 World Cup.

Since Rohit Sharma’s thumb injury is anticipated to take longer than anticipated to heal, he will lead the team in the home T20I series against Sri Lanka, starting January 3.

He served as captain for the T20I series against New Zealand.

Details of the squad, which was decided by BCCI on Tuesday, are provided in the article. The first T20 game between India and Sri Lanka will be played at Mumbai’s Wankhede Stadium on January 3.

India will welcome New Zealand to the subcontinent after Sri Lanka. It should be noted that India will host the ODI World Cup in 2023. And Team India is concentrating on ODI cricket in the lead-up to the World Cup.

IND vs SL T20I series When and where to watch?

The first match of the three-match T20I series between India and Sri Lanka will take place on Tuesday, January 03 at 7:00 PM IST.

When India and Sri Lanka last faced off in a T20I series in February 2022, India easily won all three games. Sri Lanka, however, hit back by defeating team India in the Super 4 game of the Asia Cup T20 in September.