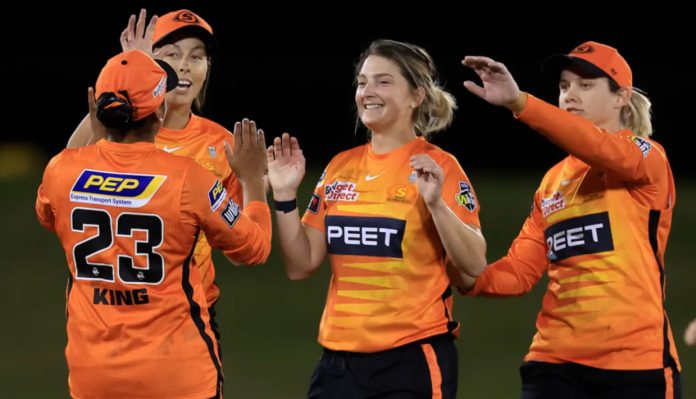 Perth Scorchers defeated Hobart Hurricanes in the eighth match of the Women’s Big Bash League(WBBL) to grab two valuable points at the International Sportspark in Sydney on Monday.

Scorchers registered their second win of the season and now moved up to second spot with a comprehensive win against Hobart.

After restricting them to 109 in 20 overs. Perth batters did not mistake and chased down the target with ease in 14.1 overs.

Earlier, Heather Graham scored the highest-run for her side that helped the team to somehow cross the 100-run mark.

Invited to bat, Hobart faced a dreary start as they lost their top-2 batters inside the powerplay, and another one right after the powerplay.

Lee, Villani and Trenaman failed to deliver for their team that put the Hobart’s side into back foot.

Mignon du Preez then bowled out by Alana King after scoring just 11. Ruth Johnston immediately rushed back without even scoring a single run.

Heather Graham, from one end, somehow manages to add some runs on board, lost her wicket her wicket too on a brilliant delivery by Devine.

After a top order collapse, Hobart faced another collapse with the tail-enders failed too to add some valuable runs on board.

Graham scored the most runs for her side as Hobart Hurricanes only managed to post 109 for 9 on board in 20 overs.

She played a knock of 35 off 28. Her knock included three fours and two sixes.

Perth Scorchers to chase 110 in 20 overs

In reply, Molly Strano was as effective as always for Hobart as she removed Perth’s skipper Sophie Devine on duck in the second over of the innings.

Beth Mooney and Chloe Piparo then made a good partnership of 54 runs for the second wicket before later got out.

Piparo smashed 31 off 26 with the help of five fours.

Mooney, however, remained still on the crease and only returned back after handing her side another victory in the big tournament.

The wicketkeeper batter scored unbeaten 38 off 26.

While Maddy Green, who came into the crease after Piparo’s dismissal, tried to end the game as early as possible. And she achieved that too.

In her small cameo of 16-ball 32, she completely changed the game and provides the supporters the joy for which they reached there with her seven boundaries.

It was an easy chase foe the Perth’s batters and with this win, they reached the second spot on the points table.

With 2 in 2 for Perth, they will look to carry forward the winning momentum in their next game when they face Sydney Thunder on Tuesday at the Blacktown International Sportspark.