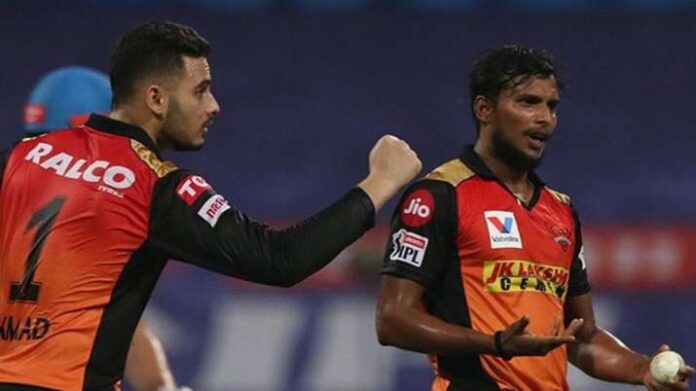 In the 14th over of the match against Delhi Capitals on Tuesday in IPL 2020, Thangarasu Natarajan was given the ball when they needed 85 runs to win in 42 deliveries — a relatively hard query, but certainly not impossible with the likes of Rishabh Pant and Shimron Hetmyer at the crease, and Marcus Stoinis waiting in the dugout. Pant had smashed two consecutive Abhishek Sharma sixes in the last two deliveries of the 13th over, which gave the Capitals a much-needed momentum boost ahead of the over.

The 29-year-old was successful in restricting two of international cricket’s most aggressive batsmen to singles with his pin-point yorkers. As a result, they were left with no choice but to target bowlers such as Bhuvneshwar Kumar and Rashid Khan, a risky proposition, and SRH reaped rewards. The pressure increased dramatically on the two.

Natarajan produced another masterclass in death-over bowling in the 18th over the innings. In his previous over, he surrendered 10 runs, but this time he just gave away seven, and dismissed Marcus Stoinis on the final delivery with an accurate yorker. As a result, the needed run-rate started to tower up (18.5 runs / over after the end of Natarajan’s over), and DC was left without a proper batsman to see them through. Four out of six balls in the over were right into the block hole.

Around 340 km from Chennai, Chinnappampatti is a small village in the Salem district. Natarajan, who comes from here, enjoys tremendous respect from the locals. With zero facilities in the region, by playing tennis ball cricket, the bowler honed his abilities and further inspired the young people in the area not to give up on their dreams of playing the game.

His mother used to be a daily-wage worker, his father worked in a saree manufacturing business, and he made it to the Tamil Nadu Premier League (TNPL) during this time of struggle. He was first signed by the Dindigul Dragons and then by the Kings of Lyca Kovai. In 2017, he took nine wickets in six games with Dindigul at a brilliant economic pace of 5.4.

After his stint with Dindigul, the IPL call-up eventually arrived when Kings XI Punjab purchased him for Rs 3 crore. “Building a nice house for my parents is the first thing I want to do with money. All their lives, they have worked. I don’t want them to work anymore,’ Natarajan told The Hindu after his first IPL contract had been secured. It was an uneventful stint, however, as he played six matches, took only two wickets and had an economy rate of 9.

His name dropped into oblivion in the public eye for the rest of the year, before he made a spectacular comeback with Lyca Kovai Kings in the TNPL. Natarajan took 12 wickets in eight matches at an even better economical rate of 5.2 and a dot-ball ratio of 49.44, improving on his performances from last year. These are the stats from the T20 tournament, mind!

He caught the attention of Muttiah Muralitharan, who at Sunrisers Hyderabad roped him in. For two seasons (2018 and 2019), Natarajan did not appear in a single game, but his exploits continued to make headlines on the domestic circuit. Natarajan took 13 wickets in 11 matches for Tamil Nadu in the Syed Mushtaq Ali Trophy earlier this year and played a major role in the side’s campaign to the finals of the tournament.

In the T20 league, he maintained an economic rate of 5.84, second-best in the 2020 edition among the top 10 wicket-takers, just behind fellow teammate R Sai Kishore. The time to announce himself on the big stage finally came in this year’s IPL edition, where he started the Indian captain Virat Kohli’s wicket tournament with a long ball in SRH’s opening match. The Yorker, however, has long been his power.

Bowling yorkers is something that came to me naturally when playing cricket on a tennis ball. With the tennis ball, I used to bowl them slightly wide so the batsmen would take a swipe at the straighter deliveries. Natarajan had said to a leading website that the yorkers outside off-stump also performed for me in TNPL as they are difficult to score off.

Clearly, against the Delhi Capitals, his moment eventually arrived when three international batsmen, well known for their exploits, were troubled by the York barrage. His exceptional precision won him praise from Brett Lee, Australia’s bowling legend. That’s how you bowl in an innings at the back end! Natarajan, excellent, “Lee wrote on Twitter.

Virender Sehwag, who was part of the management of Kings XI Punjab when they purchased Natarajan, also heaped praise on the bowler. “For Natarajan, pleased. At the end, excellent execution of yorkers. Rashid was also sensational. Better now that all the teams are off the mark. The fun continues. He wrote,” Om Tewatia Namah.