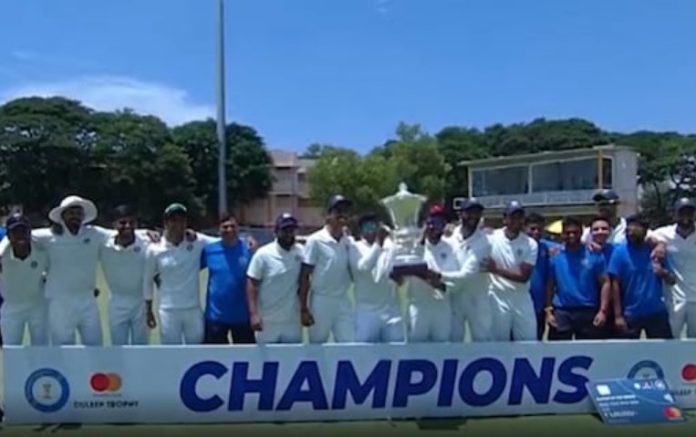 West Zone registered a comprehensive victory over the South Zone on the last day of the final to win the Duleep Trophy 2022 in Coimbatore.

The Ajinkya Rahane-led side was 57 runs behind after the halfway stage of the game, made a solid comeback, courtesy of Yashasvi Jaiswal’s 265-run, and Sarfaraz Khan’s unbeaten 127 that put the side way ahead in the game.

Later, their bowlers in second innings, did everything right to help West Zone win Duleep Trophy 2022.

Opting to bat, the West Zone faced a dreary start as they lost their top three batters for 16, while the fourth one on 64 runs, followed by fifth on 99 and sixth on 101.

Het Patel, the wicket-keeper batter was the only one, who maintained his rhythm throughout the innings, while other batters found it hard to stay on the crease for long.

Patel did his best to add as many runs as possible but missed his well-deserve century in process by 2 runs. However, his knock help the side put 270 on board in first innings.

Sai Kishore completed a fifer in the first innings for South Zone.

In reply, South Zone, posted 327 runs, thanks to Baba Indrajith’s splendid hundred. Apart from him Manish Pandey scored 48, and Krishnappa Gowtham added 43 to the score.

Jaydev Unadkat was the pick of the bowler for West Zone. He took four wickets.

With 57 runs behind, West Zone openers provided their side a strong start, having added 110 for the first wicket. Rahane again failed to show some magic and got out for 15.

Shreyas crucial knock of 71 along with Sarfaraz and Het Patel’s unbeaten 127 and 51, respectively, and Jaiswal’s, 265, of course set the tone for the West Zone.

Chasing 538, South Zone bundled out for just 234 to lose the game by a huge margin of 294 runs. Rohan Kunnummal was their top-scorer of the innings with 93.

Shams Mulani, in this innings completed a four-wicket haul.