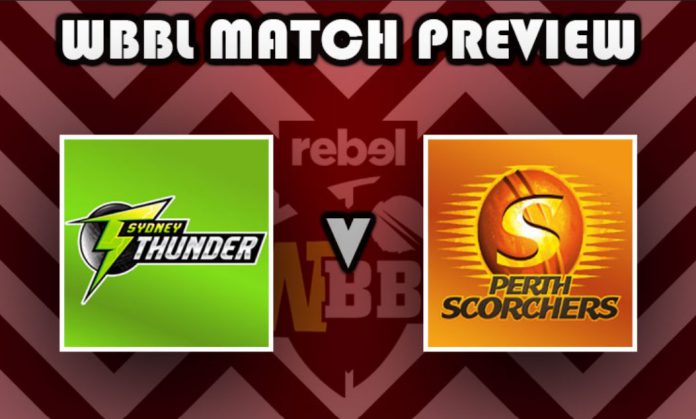 The defending champions began their season with a decisive victory over Sydney Thunder thanks in large part to Sophie Devine’s outstanding batting performance.

In challenging circumstances, the Thunder’s decision to bat first flopped as Perth restricted them to 8-88, their lowest-ever WBBL total, while the Scorchers only lost one wicket as they completed the chase in 14.5 overs.

Tammy Beaumont was caught for 1 run on the pads by Scorchers all-rounder Marizanne Kapp with her first legal delivery.

Game-changing moment: The mix-up in the middle

The Thunder captain forced to run out for two after a tragic mix-up involving Chloe Tryon and Rachael Haynes caused her opening partner Phoebe Litchfield (2) to meet the same fate against the spin of Lilly Mills an over later.

Hard-hitting The Thunder were in trouble at 4-17 after Tryon once reached the boundary but soon bowled by Alana King.

Anika Learoyd (26 runs off 40 balls) and Tahlia Wilson (28 runs off 35 balls) pushed hard to add significant runs, but they were the only Thunder batters to reach double digits as their innings concluded on 8-88.

With aid from Beth Mooney for 19 runs and Maddy Green. The Scorchers were able to complete their innings in 14.5 overs after captain Sophie Devine’s unbeaten 44 from 42 balls. Which included the only six of the game.

Introduction of Amy Jones from the next match

The addition of England’s Amy Jones. Who missed the first two games of the season due to injury. Is expected to improve the Thunder’s batting lineup in the next games.