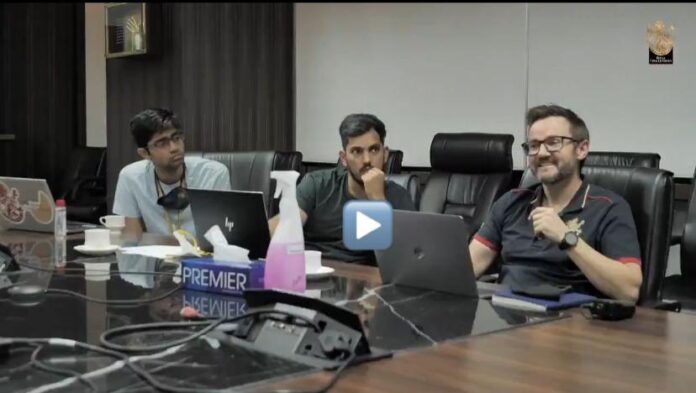 There is plenty more to a team’s success than just their performance on the field. Every team goes through tons of planning and plotting before stepping into their next tournament or to their next series or even something like an auction. The Indian Premier League held their mini-auction on February 18 as the 8 participating teams looked to strengthen their side before heading towards the upcoming season. Here We RCB conducts the mock auction

A total of 292 players went under the hammer as South African Chris Morris became the most expensive IPL player to ever be sold. Rajasthan Royals paid a total of 16.25 crore for the 33-year-old all-rounder. Australia’s Glenn Maxwell was also one of the most expensive players in the 2021 IPL auction.

Royal Challengers Bangalore emerged victorious in their quest to sign Maxwell for the upcoming season. There were plenty of bidders for Maxwell albeit his poor form in recent years in the IPL. The Bangalore-based franchise was motivated to sign the Australian all-rounder as they bagged the player for a handsome amount of 14.25 crore. The RCB’s management was very firm on their approach for Maxwell.

IPL 2021: How did RCB prepare to buy Maxwell before the auction?

RCB’s move to buy Maxwell raised plenty of questions considering his average form in India’s top-tier league. However, it looks like RCB were well prepared to go on a bidding war for the Australian in the mini-auction. RCB’s social-media account recently released a video in which the whole management, including the team’s director of cricket, Mike Hesson, can be seen gearing up for the mini-auction.

The RCB’s management even conducted a mock auction for Maxwell, with members of the team’s support staff playing the role of various sides. Adding to that, RCB’s Director of Cricket, Mike Hesson even predicted that it would be the Chennai Super Kings (CSK) who will be eager to pouch Maxwell in the auction and it rightly happened so. Only time can say whether it was the right move from RCB to spend over 14 crores for Maxwell but their level of analytics and deep study of the game is commendable.

Why did RCB go all out for Glenn Maxwell?

RCB’s Director of Cricket, Mike Hesson, revealed the reason behind buying Glenn Maxwell for the upcoming IPL season. He said “The reason why we like him is that he’s the most dangerous in overs 10-15. Since 2014 in the middle overs, his average is 28 with a strike rate of 161.5. That would do us beautifully. And he can be a bowling option. We need somebody in that top 6 that can bowl 3-4 overs, but Maxwell can bowl two. Those numbers are exceptional,” said Hesson in a video released by RCB on Twitter.