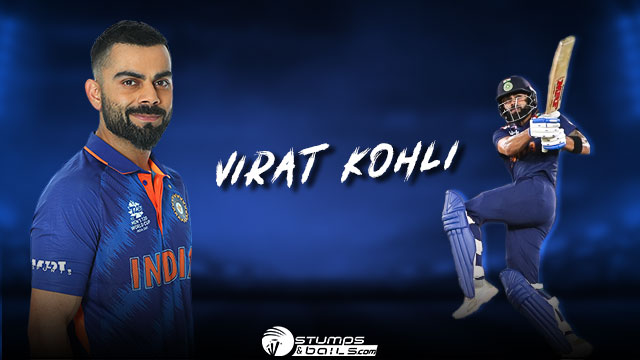 Wildly Regarded as the greatest batsman of the modern generation, Virat Kohli has been the most consistent batter for India. He has been an impressive infield since he marked his presence in the Under -19 World Cup in 2008 where he led India to glory. Since, Sachin Tendulkar decided to retire from the Indian team, Virat was the one India looked to in times of hardship. He never disappointed his fans and has been doing the same for the past 14 years for the country. With multiple awards and records in recent years, Virat Kohli has emerged as the best batsman in the world at present.

Virat Kohli, (born 5 November in Delhi, India) is a right-hand Indian Batter. Kohli began his cricketing journey in 1998. He and his brother used to attend cricket camp in West Delhi where coach Rajkumar Sharma used to train over 250 kids. Virat was one of the youngest in the academy. He played in various tournaments in his early days.

Virat started playing in Under-15 for Delhi in 2002. A year after he played in the Delhi Under-17 team. He made his first-class debut in the year 2006 against Tamil Nadu. Virat played over 270 List A matches in his career. In the same year, he got selected for the Indian Under-19 squad. In 2008, he made his debut for India in

Under-19 when he played against England followed by the tour of Pakistan where his average was 58 in test matches and over 41 in ODIs.

he was made captain of the young Indian Under-19 team, and he led his team from the front to win his first ICC trophy i.e. Under-19 Cricket World Cup in Malaysia.

Virat made in debut on August 18, 2008, on the tour of Sri Lanka. On that tour, Virat hit his maiden half-century in the 4th game that later turned out as a match and series-winning knock. In 2009, the regular opener of the Indian team at that time Gautam Gambhir got injured providing the opportunity for Virat’s selection in the team. In the series against Sri Lanka in 2009, he scored his maiden ODI century and was rewarded with his first Man of the Match award. 2010 was considered the turning point of Virat’s career. He finished the year with 995 runs and was the leading run-scorer in the world in 2010. Later he was picked up in the squad for Cricket World Cup 2011 where he played some crucial knocks and helped India in lifting the trophy after 27 years.

Virat made his T20I debut in 2010 against Zimbabwe. In the same year, Kohli was named as the Vice-Captain for the tri-series against Sri- Lanka, and Zimbabwe.

In 2011, Virat made his debut in the tests against West Indies. Later, in a home series against Australia, he emerged as the top scorer of the series and helped India to a series win of 4-0.

In 2014, due to an injury to MS Dhoni, he was appointed as captain of the Indian team. In his captaincy, India whitewashed Sri Lanka in 5 match series.

A year after Kohli was made full-time captain for all three formats.

He is also considered as Fabulous 4 with Kane Williamson, Steve Smith, and Joe Root. He remained number 1 in ODI and Test ranking in the world for many years.

Virat Kohli is one of those rare players who are the part of the same IPL team since the beginning. He was bought by Royal Challengers Bangalore in 2008 and has been the most important player of the franchise. He was made captain of RCB in 2013.

In 2021, he decided to step down as the captain of the franchise. Presently, Virat is the only player to score more than 6000 runs in IPL. He has scored 6283 runs in 207 matches with 5 centuries and 42 half-centuries.

In Tests, Virat has played 101 matches and scored 8043 runs with 27 centuries and 28 half-centuries.

· Fastest Century by an Indian Cricketer in ODIs.

· Fastest batter to reach 35 centuries in the world.

· Most successful Test Captain in the world.

Virat lost his father in 2006 due to a stroke. This setback later turned out to be the decisive moment of Virat’s career. He scored crucial 90 runs for his Delhi team in the Ranji Trophy match against Karnataka after his father’s death the previous day.

Virat’s father Prem Kohli was a criminal lawyer and his mother Saroj Kohli is a homemaker. He has two siblings in the family a brother Vikas Kohli and a sister Bhawna Kohli. Virat is married to a popular Bollywood actress Anushka Sharma in 2017. The celebrity couple was blessed with a baby girl in 2021 who is named Vamika after the Goddess Durga.

Virat lost his father in 2006 due to a stroke that turned out to be the decisive moment in his life.

Virat Kohli was trained by coach Rajkumar Sharma in his early days in West Delhi.

Virat stepped down as RCB’s captain after the 14th edition of the league. He was made captain of RCB in 2013.

5. When did Virat Kohli win his first ICC tournament?

Virat won his first ICC tournament in 2008 where he led India to victory in ICC Under-19 Cricket World Cup in Malaysia.

6. In how many ICC events did Virat Kohli lead India?