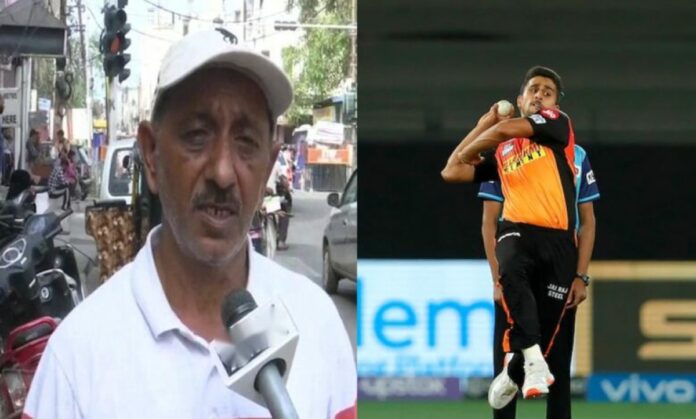 Abdul Rashid, Umran Malik’s father, was overcome with emotion when the media approached him for comment after his son was picked in the India team for the South Africa T20s. “People were lining up in droves to congratulate me. I’m on my way home and would like to participate in the festivities. I just got the news from the internet. What could be more impressive than donning the national colors? “Rashid told PTI over the phone as he rushed to his Jammu home in Gujjar Nagar.

The SRH bowler has been outstanding for his team, taking up wickets at an alarming rate. In the league, he has the fastest ball bowled by an Indian, clocking 157 kph. Umran’s victory will benefit his home state of Jammu greatly. And it will continue to inspire future generations. His father stated that his kid had the entire country’s backing.

“We can only be glad that he has made all of us proud with his accomplishments in the IPL and the way the whole country rallied behind him. Mere Umran ko, Pura Desh ke support mila, “He stated in a tone that may be seen as emotional. Rashid and his wife have made sacrifices to help Umran break through obstacles, but the father refuses to take credit.

SunRisers Hyderabad's Umran Malik, the only Indian in top 10 for this IPL season to throw the fastest balls, has made his father Abdul Rashid proud who said, "With this feat, my son has made Jammu&Kashmir & the entire country proud. Glad that he got to participate in IPL." (5.10) pic.twitter.com/P2ortrVn1d

“Umran was confident in his ability to succeed one day. He believed in his abilities and worked hard to develop them. It is entirely his success, as well as the blessings of Almighty God. He worked hard and was helped by God. I am not deserving of credit for his efforts “Rashid said.

After Parvez Rasool, Umran is the second cricketer from Jammu & Kashmir to play for India. Umran is a Jammu youngster who is coached by Randhir Singh Manhas and taught by senior state team pacer Ram Dayal, who also gave him his first spikes. Umran has a powerful lower body, despite not being as large as some of the fast bowlers. He refined his abilities on sandy grounds near the Tawi River.

He owns a well-to-do fruit business in the city’s Shaheedi Nagar neighborhood, which may explain why Rashid never believed Umran’s passion for cricket was a hindrance to his schoolwork.

Wearing the India Blue shirt is a lifelong ambition for Rashid, who is unconcerned about how IPL riches and an India call-up may affect their financial situation. Their Gujjar Nagar colony had exploded in joy, with ecstatic young people holding the player’s posters and dancing to the beat of the drums.