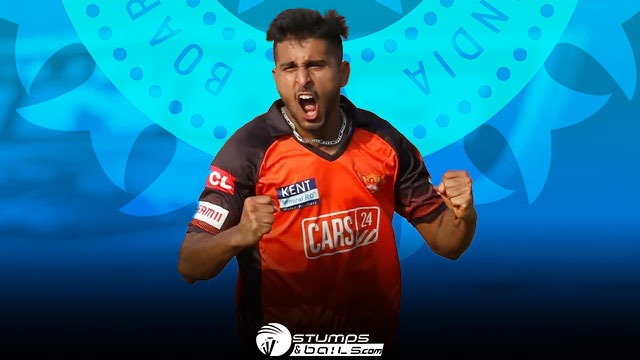 Born in Jammu and Kashmir, India, Umran Malik is an Indian right-arm fast bowler. He is known for his fast bowling skills and is unarguably one of the fastest bowlers in the world presently. Malik came to attention when he got selected in the Sunrisers Hyderabad squad during the 2021 Indian Premier League season. Umran can bowl consistently over 150 km. Recently, according to the reports Umran Malik is on BCCI’s radar for the upcoming T20I series after TATA IPL 2022. BCCI is looking forward to extending the pool of bowlers for T20 World Cup later in 2022.

Umran started playing cricket 2016 at the age of 17 years. Umran developed his pace over the years by playing with tennis ball. His father helped him in making cricket as his career. He started playing in Jammu and Kashmir Sports Council located in Srinagar. In the ground, he was spotted by the head of the academy Randhir Minhas. He was delighted with his pace but also criticized him for wasting his talent by showing such casual behavior in the field. Under his guidance, Umran got picked up in the Under-19 team of Jammu and Kashmir but did not get a chance to play any match in his starting days. He was spotted by Assam head coach and former Indian Wicketkeeper batter Ajay Ratra in the nets. He criticized selectors for not picking him up in the squad.

In 2018-19, he got selected in Jammu and Kashmir team with former Indian bowler Irfan Pathan was his mentor. Pathan was helping him in nurturing his talent for upcoming tournaments but due to the continuous protests in Kashmir after lifting of Article-370, training camps were stopped and players were sent to their places.

Some months later, CEO of Jammu Kashmir Cricket Association helped all the players to get back to the camps and resume their training.

Umran malik made his Twenty20 debut in 2021 against Railways in Syed Mushtaq Ali Trophy tournament. He picked up 3 wickets in his debut match and just gave up 24 runs in 4 overs.

In February 2021, Malik got picked up in the squad of Vijay Hazare Trophy and made his debut against Bengal in Kolkata. He didn’t get a dream start on his debut and leaked 98 runs in 10 overs. He made his first- class debut against South Africa A in November 2021.

Umran was selected as one of the net bowlers in 2021 Indian Premier League for Sunrisers Hyderabad. As a net bowler, he impressed everyone with his raw pace, especially when he troubles Australian left-hand batter David Warner in the nets.

During the second leg of IPL 2021 in UAE, Sunrisers bowler T. Natarajan was ruled out of IPL due to Covid-19 and Umran Malik was called in as his replacement.

Umran Malik made his IPL debut on 3 October 2021 against Kolkata Knight Riders. In his complete 4 overs he conceded just 27 runs. In a match against Royal Challengers Bangalore he consistently bowled 5 deliveries over 150 kmph. He also bowled the fastest delivery of the season in the same match at 152.95 kmph.

He didn’t get many wickets in IPL 2021. However, after seeing his raw pace Sunrisers didn’t wanted to lose this asset. So, they retained Umran Malik ahead of the mega auction for TATA IPL 2022 for a whopping amount of 4 crores.

During a match against Punjab Kings in TATA IPL 2022, Umran became the fourth bowler in the history of IPL to bowl a maiden last over. He also picked three wickets in that over.

In IPL, Umran Malik has played 9 matches and has taken 11 wickets with the best bowling figures of 4/28 in a match.

After impressing everyone with his raw pace in IPL, Umran Malik was picked up as the net bowler for Indian Team in ICC T20 World Cup 2021.

Recently, BCCI is considering to enhance its pool of fast bowlers for T20 World Cup 2022 in Australia. Umran Malik is in BCCI’s radar for the T20I series against South Africa and Ireland after TATA IPL 2022.

Malik’s father Abdul Rashid was a fruit seller in Jammu Kashmir. His mother is a home maker. He has one elder sister and a younger brother.

Umran started playing cricket 2016 at the age of 17 years.

2. When did Umran Malik made his IPL debut?

Umran Malik made his IPL debut on 3 October 2021 against Kolkata Knight Riders.

3. What is he fastest ball bowled by Umran Malik?

4. When will Umran Malik make debut for India?

Umran Malik is in BCCI’s radar for the T20I series against South Africa and Ireland after TATA IPL 2022.

5. How did Umran Malik made his IPL debut?

During the second leg of IPL 2021 in UAE, Sunrisers Hyderabad bowler T. Natarajan was ruled out of IPL due to Covid-19 and Umran Malik was called in as his replacement.

6. Who was the mentor of Umran Malik?

Irfan Pathan was the mentor of Umran Malik.

7. How many wickets Umran Malik has taken in IPL?

In IPL, Umran Malik has played 9 matches and has taken 11 wickets with the best bowling figures of 4/28 in a match.

8. Who is Umran Malik’s father?