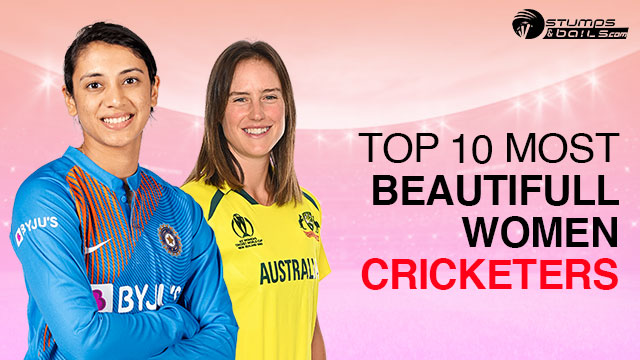 In the recent years, women’s cricket has managed to get an unimaginable fame and attention across the world. There has been a tremendous improvement across all the departments of the cricket and have often showcased their mettle when it mattered the most. The foundations laid by the game at its core level was grasped and are being implemented at all levels by female teams putting up a good show. In this article, we will see some popular faces of Top 10 most beautiful women cricketers in the world.

Sana is not only one of the most beautiful women cricketers in the world but also an inspiration to introduce the game in Pakistan. Born in 1986, Mir is the Captain of her national side and was also the first female player to receive the award to PCB Women cricketer of the year in 2013.

Holly is one of the prettiest women cricketers in the world. She made her debut at the age of 17 in the year 2013. She was highly impressive with her fast-bowlingskills in domestic circuit that led to her inclusion in national team. However, she couldn’t show at an impressive level on international platform. She played her last international match in 2016. Yet, she has been working hard on her game.

A wicket-keeper batter has stumped many hearts with her beautiful appearance. In 2018, she was named as one of the Breakout Stars by ICC. Tanya also comes from cricket background. She was trained by Yuvraj Singh’s father Yograj Singh in her early days. Her father Sanjay Bhatia was an all-India university level cricketer. She made her debut for the national side in 2018 and since then she is an integral part of the team.

Sarah is an explosive opening player. The 30-year-old wicket-keeper was named T20 Women’s Cricketer of the year for two consecutive years in 2012 and 2014. She was awarded with ICC ODI Cricketer of the Year in 2014. The gorgeous cricketer was the youngest female player to score 1,000 runs in the ODI format. Apart from the game, she has a huge following on Instagram grabbing the hearts with her looks and style.

Kate worked extremely hard to get herself into the national side. Despite giving some good domestic performances, she didn’t get a break to enter the national team until 2011. Since then, she started representing England was also one of the first few players who got a full- time professional contract from England.

Rosalie is an English cricketer who grabbed the attention of fans with her beauty as well as incredible spin bowling. She also played an important role as a lower middle order batter. She represented her national side in 7 Tests, 4 T20I and 37 ODIs.

Leah was one of the most popular Australian women cricketers of her time. She was not only known for her batting skills, but also for her beauty. She had a massive fan following across the globe. She represented her national side for many years and led the Australian under- 19 and under-23 teams. She was an integral member of her squad for a certain period.

Isobel is a former Irish cricketer who represented and led her country from the front. A good– looking person showcased an emphatic performance many a times while on the field. She had a calm mentality that helped her team many times in difficult situations. She also received a lot of awards during her playing days.

Smriti became a national sensation since her debut. She was given the title of ‘National Crush’ in 2017. She is not only one of the prettiest players but also one of the best batters in the world at present time. In 2018, she was awarded with Rachael Hayhoe-Flint Award for the best female cricketer of the year. In the same year ICC named her the ODI player of the year. She is the first Indian player to feature in Kia Super league.

Ellyse is undoubtedly one of the greatest women cricketers in the world. She is highly skilled in both batting as well as with the bowl. She is the youngest player to represent Australia in Cricket. She is the only Australian to have represented her country in both Cricket as well as Soccer World Cup. She has played over 200 matches for her side and has an average of over 50. She also has nearly 300 wickets to her name.

Smriti Shriniwas Mandhana has stolen the hearts of men across the globe. This 25-year-old left-handed player hails from Maharashtra and represented the team at U-15 and U-19 teams at domestic level. She belongs to Marwari family.

2. Who is the hottest cricketer in world?

Former Indian skipper MS Dhoni would make the heads turn with his coolest appearance. Popularly known as ‘Mahi’, ‘Thala’ and ‘Mr.Cool’, this 40-year-old cricketer hails from Ranchi in Bihar. This right-handed wicket-keeper batsman, holds honorary rank of Lieutenant Colonel in the Parachute Regiment of the Indian Territorial Army since 2011.

3. Who is the best female cricketer in the world?

Born on 3 November 1990, Ellyse Alexandra Perry is an Australian sportswoman and represents her country in cricket and association football. She is credited as a leading personality for the rising female participation in Australia’s sporting culture due to her appearance as “the ultimate role model” off-the-field. She is also known for her on-field performance showcasing a promising game to the cricket audience.

4. Which cricketer has best wife?

Jassym Lora, an American model, is the wife of West Indies Cricketer Andre Russell. Born in Miami of United States, Lora made her choice of being a model in her childhood when she understood that her talent is in the modelling but not in the academics. She loves watching her husband being on-the-field and, sometimes, joins the audience cheering for her husband from the stadium.