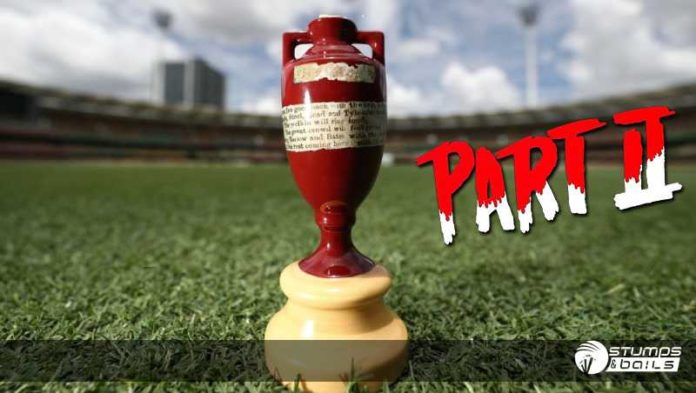 It took many years to give the name “The Ashes” for ongoing series between England and Australia before 1925 there was no concept of there being a representation of the ashes being presented to the winners. As late as 1925 the following verse appeared in The Cricketers Annual:

So here’s to Chapman, Hendren and Hobbs,
Gilligan, Woolley and Hearne
May they bring back to the Motherland,
The ashes which have no urn!

The oldest, was the one presented to Bligh, later Lord Darnley, during the 1882–83 tour. The precise nature of the origin of this urn is a matter of dispute. Based on a statement by Darnley in 1894, it was believed that a group of Victorian ladies, including Darnley’s later wife Florence Morphy, made the presentation after the victory in the Third Test in 1883.

Research team, in particular, Ronald Willis and Joy Munns have studied the England tour in detail and concluded that the presentation was made after a private cricket match played over Christmas 1882 when the English team was guests of Sir William Clarke, at his property “Rupertswood”, in Sunbury, Victoria. This was before the matches had started. The prime evidence for this theory was provided by a descendant of Clarke.

In August 1926 Ivo Bligh (now Lord Darnley) displayed the Ashes urn at the Morning Post Decorative Art Exhibition held in the Central Hall, Westminster. He made the following statement about how he was given the urn:

When in the autumn the English Eleven went to Australia it was said that they had come to Australia to “fetch” the ashes. England won two out of the three matches played against Murdoch’s Australian Eleven, and after the third match, some Melbourne ladies put some ashes into a small urn and gave them to me as captain of the English Eleven.

A more detailed account of how the Ashes were given to Ivo Bligh was outlined by his wife, the Countess of Darnley, in 1930 during a speech at a cricket luncheon. Her speech was reported by the London Times as follows:

In 1882, she said, it was first spoken of when the Sporting Times, after the Australians had thoroughly beaten the English at the Oval, wrote an obituary in affectionate memory of English cricket “whose demise was deeply lamented and the body would be cremated and taken to Australia”. Her husband, then Ivo Bligh, took a team to Australia in the following year.

Punch had a poem containing the words “When Ivo comes back with the urn” and when Ivo Bligh wiped out the defeat Lady Clarke, wife of Sir W. J. Clarke, who entertained the English so lavishly, found a little wooden urn, burnt a bail, put the ashes in the urn, and wrapping it in a red velvet bag, put it into her husband’s (Ivo Bligh’s) hands. He had always regarded it as a great treasure.

There is another statement which is not totally clear made by Lord Darnley in 1921 about the timing of the presentation of the urn. He was interviewed in his home at Cobham Hall by Montague Grover and the report of this interview was as follows:

This urn was presented to Lord Darnley by some ladies of Melbourne after the final defeat of his team, and before he returned with the members to England.
He made a similar statement in 1926. The report of this statement in the Brisbane Courier was as follows:

The contents of the urn are also problematic; they were variously reported to be the remains of a stump, bail or the outer casing of a ball, but in 1998 Darnley’s 82-year-old daughter-in-law said they were the remains of her mother-in-law’s veil, casting a further layer of doubt on the matter.

However, during the tour of Australia in 2006/7, the MCC official accompanying the urn said the veil legend had been discounted, and it was now “95% certain” that the urn contains the ashes of a cricket bail. Speaking on Channel Nine TV on 25 November 2006, he said x-rays of the urn had shown the pedestal and handles were cracked, and repair work had to be carried out. The urn is made of terracotta and is about 6 inches (150 mm) tall and may originally have been a perfume jar.