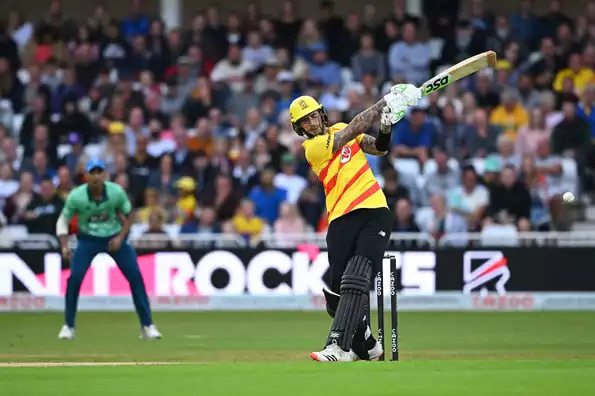 Hales and Malan hit first, placing strong openings and backfoot Invincibles on offense. This included a five-ball his spell from Sam Curran, in which he scored the same number of sixes as his two fours. Hales scored a half-century with just 22 balls before Mohammad Hasnain snapped the winning streak with his 84 balls.

After Hales was out, the Rockets’ innings slowed off for a spell, but by the conclusion of the inning, Colin Munro and Lewis Gregory had slugged some lusty strokes that raised the score to 181 for 4.

Invincibles’ innings failed to gain the necessary momentum in the chase when opener Will Jacks was eliminated by Sam Cook in the 18th delivery, in response. In the middle, Shamsi bowled a few tight overs and even managed to get rid of Jason Roy and Sam Billings, bringing the score down to 42 for 3 in 35 deliveries.

Jordan Cox’s counter attack arrived a little too late for the team’s tastes, and even Curran and Sunil Narine’s backing was insufficient. Cox scored an undefeated 33-ball 61, consisting of four boundaries and three sixes, but the team could only reach 156 for 5, and the Invincibles suffered their second loss of the year.