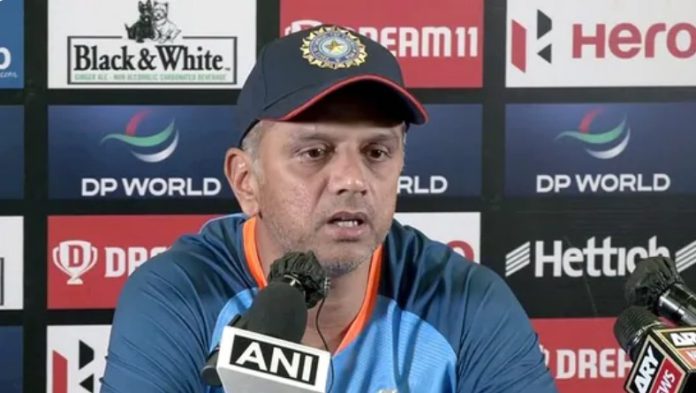 Claimed that his nation fell 10-15 runs short of England in the semifinal of the T20 World Cup 2022, in which they lost by 10 wickets. Team India, according to Dravid, would consider what they’ve learned and consider how to move forward to become a better T20 team. The defeat is India’s first semi-final loss since winning the ICC Champions Trophy in 2013. The fact that India lost by 10 wickets in a World Cup match for the second time would make the loss much more painful for them. In 2021, Pakistan had already caused India to lose a similar amount of ground.

“We weren’t good enough that day. We must evaluate our actions and go forward with improvement. In the semifinals, runs on the board are quite helpful. In the same way, we sought to proceed. We had previously scored 180+ runs in the competition. The pitch, according to the boys, was a little slower. They did not allow us to flee. We were lacking by perhaps 15–20 runs. Hardik performed superbly. We ought to have gotten 180 on that pitch “Dravid spoke during the post-game press conference following the 10-wicket defeat.

When an English journalist questioned about BBL:

When an English journalist questioned Dravid about whether he advises Indian players competing in the Big Bash League to acclimate themselves to the local environment, Dravid responded that the BCCI should make that determination. Additionally, it would be challenging for Indian players to compete in the BBL during their own peak domestic season. “There is no denying that many players came to play in the BBL here. It appeared today. It is really challenging for Indian cricket. Many of these competitions take place in the middle of the season. BCCI is responsible for making such choice “Dravid stated.

Later when a veteran scribe mentioned the word ‘debacle’, the former India captain said, “not a debacle but yes disappointed.”

According to the coach, India may have fallen short by about 15 runs. Hardik (Pandya) performed brilliantly in the final innings. I initially believed we were behind by 15 to 20 runs at the 15-over point, but Hardik performed superbly.

We all know that Jos Buttler is a dangerous player, he continued. Alex Hales got the game going, and once the needed run-rate was down, they had control.

Even though India had a strong run up until the semifinal round, Dravid said that it would be premature to evaluate the team’s overall performance merely hours after a defeat.

Dravid responded quickly when asked about the possibility of allowing Indian players to participate in international T20 leagues like the Big Bash: “We have a tight season and if our players go to the overseas leagues, it will affect domestic cricket like the Ranji Trophy, and with that, our Test cricket would be affected. We don’t want to follow the West Indies’ example since we have seen what occurred there.