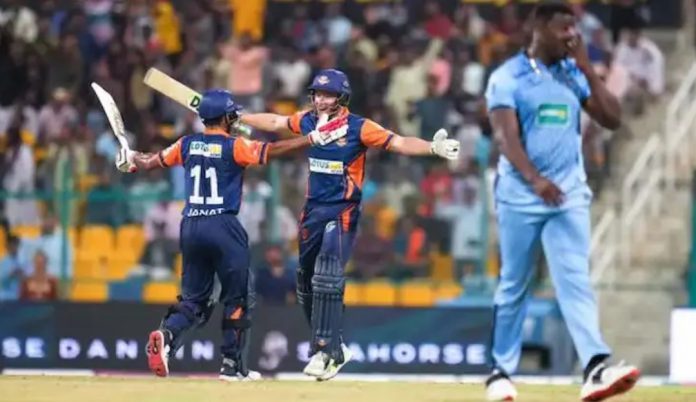 TAD Vs MSA match highlights: Team Abu Dhabi claimed the fourth place at the points table with a comprehensive 18–run win over the Morrisville Samp Army in the seventeenth match of the Abu Dhabi T10 league on Tuesday.

Abu Dhabi bowlers controlled the whole game and didn’t let Samp Army batters to open their arms, except Basil Hameed (47 off 18), no other MSA batters showed fighting courage in the game as a result Chris Lynn’s Abu Dhabi won the game by 18 runs.

Earlier, Chamika Karunaratne starred with the bowl for MSA side by providing two important breakthroughs at crucial times to put the opposition on back foot. James Vince scored the most runs for team Abu Dhabi with 44 off 25.

Opting to bat, Team Abu Dhabi faced a big shock when they lost their dangerous batter Alex Hales on the very first bowl of the match.

It was a clever move by the skipper Moeen Ali, who knows his English team-mate well, as he put oh left-arm orthodox bowler to bowl the first over and he did the job for his skipper and team by removing Hales.

George Garton then picked the bowl in his hand and loose the momentum by giving 11 runs of the second over of the innings.

Ahmed Raza too failed to grip in his second over and gave 11 runs. James Vince was looking aggressive touch, while skipper Chris Lynn playing anchor role aside him till the third over.

But soon after, during the fourth over, Lynn made his intentions clear by hitting two consecutive sixes against the player with the most tournament wickets, Pretorius.

Dwaine Pretorius leaked 18 runs off his first over. Anrich Nortje then gave 8 runs of the fifth over to restrict the side to 57 for 1 in 5.

Karim Janat and Chamika Karunaratne followed the same route and kept things tight for the Abu Dhabi batters by bowling slower and outside the off-stump balls as a result skipper Lynn got out while trying to clear the log on. Karunaratne then removed Brandon King with a brilliant caught and ball take.

James Vince remained unbeaten with 44 off 25, while Fabian Allen played a decent not out hand of 14 off 10 in the process

Chamika Karunaratne was the pick of the bowler for MSA side as he gave just 13 in his 2 overs while picking up 2 crucial wickets.

Samp Army’s batters entered the field with the intention of giving their side a strong start, but Naveen ul Haq prevented that by bowling a tight over and only allowing 2 runs off the opening over.

Peter Hatzoglou make the most out of the opportunity as he trapped Johnson Charles in his leg spin and forced him to hit as a result he was caught.

Samp Army witnessed another shock in the same over as their skipper walked back for duck, he played a good shot, though, but the whole credit goes to the fielder Fabian Allen, who took an unbelievable catch at covers.

Andrew Tye then removed Karim Janat on the very first ball and dangerous Shimron Hetmyer on the fifth ball off the third over to put more pressure on the MSA side.

Things not were in Samp Army’s favour in the game, as they then lost their most reliable batter David Miller for 1, and it was Hatzoglou again, who bagged yet another important wicket.

Fabian Allen then joined the party as he got rid off two more MSA’s batters in the sixth over.

Basil Hameed showed some signs of a fight back and scored unbeaten 47 off 18, but it wasn’t enough to hand his side a win as Morrisville Samp Army lost the game by 18 runs.