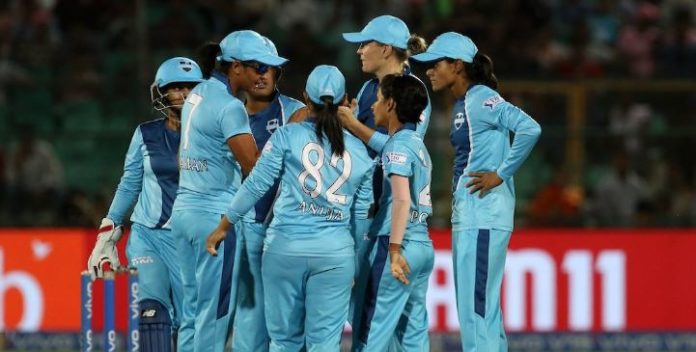 Velocity has won the toss and asked Supernovas to bat first. It was a must-win game for Supernovas and maintain good NRR in order to qualify for finals. Whereas Velocity started well but once the wicket started falling, they set back and don’t want loose wickets in the middle order so that they can keep in mind about NRR to and played according to that.

They got off to a steady start. Jemimah, who joined Chamari Athapaththu at the fall of the first wicket, brought urgency to proceedings. She opened her account with two boundaries – a fluent drive through cover and a drive straight down the ground. They both stitched 55 runs partnership.

After Athapaththu dismissed for 31 Jemimah continued to Score along with Devine and Kaur. Jemimah continues to score boundary and reached her half-century. Jemimah was dropped in the 15th over in deep and she capitalizes to get her team to a good score. While she scored 77 off 48 balls, the rest of team in the Supernovas line-up scored 57 from 73 balls.

For Velocity, Shikha Pandey lived up to expectations as she picked up the wicket of opener Priya Punia and ended with impressive figures of 4-0-17-1. The young leg-spinner Amelia Kerr would be the most successful bowler, returning figures of 4-0-21-2.

Velocity, despite losing both openers early, put up a fight through Danielle Wyatt, who batted at number three. The English all-rounder was aggressive against the spinners early on. Wyatt hit four boundaries and two sixes, scoring 43 from 32 balls.

Mithali Raj and Veda Krishnamurthy, with one eye on the NRR scenario, only added 35 runs in the next 6.3 overs. For Supernovas, Poonam Yadav was sensational with the ball as she took one wicket and put the brakes on scoring when Mithali and Veda were batting, she bowled 12 dot balls.

Both the Teams showed up a good game and both got qualified for the FINALS.

Jemimah was awarded as the player of the match from the supernova.

Again both teams will face each other at finals of Women’s T20 Challenge at Sawai Mansingh Stadium, Jaipur on 11th May 2019.