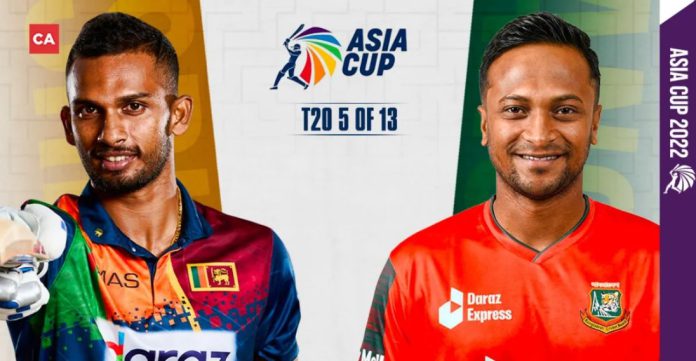 Sri Lanka registered a 2-wicket win over Bangladesh in their second and final Group B encounter of the Asia Cup 2022 and joined Afghanistan and India in the Super Four stage on Thursday.

Chasing 184, Sri Lankan batters gave their all in a do or die match and reached the target in the final over at the Dubai International Cricket Stadium.

Earlier, Bangladesh managed to record a total of 183 in 20 overs, courtesy smashing innings of 39 and 38 from Afif Hossain and Mehidy Hasan Miraz.

Invited to bat first, Bangladesh lost their first wicket early as Sabir Rahman walked back to pavilion after scoring just 5 runs. However, Miraz continued his destructive approach from the other end and provided Bangladesh a flying start before Wanindu Hasaranga bowled him up.

Former skipper Mushfiqur failed to leave any mark and got out for 5, while the current captain Shakib Al Hasan did show some signs of rescuing his side but the young Mahesh Theekshana didn’t allowed him as he bowled the southpaw for 24.

Afif Hossain then stitched a 57-run partnership with Mahmudullah after Bangladesh were reeling at 87 for four. The partnership put the men in green back on track, while the late surge from Mosaddek Hossain, who scored unbeaten 24 off just 9 helped Bangla Tigers to put 183 on board in 20 overs.

Chasing a target of 184, Sri Lanka off to a flying start as both their openers showed their destructive side to keep their team in game and the competition.

Both took Sri Lankan team to 44 in first 5 overs, then came Ebadot Hossain on attack and changed the whole scenario after removing both the openers in the 6th over.

In his next over, Ebadot removed Gunathilaka. Bhanuka Rajapaksa also failed when he tried to hit an upper cut but the third man did no mistake as he got out after scoring just 2 runs.

A good partnership then between the skipper Dasun Shanaka and Kusal Mendis of 54 runs gave some hopes but Taskin Ahmed took another super catch to dismiss well set Mendis for 60.

Sri Lanka were still confident for the win as their skipper was on the crease with the Lankan team needed 26 off 14, but there was a twist in the game as Shanaka lost his wicket while trying to clear the log on. He scored 45 off 33.

Chamika Karunaratne, who starred with ball tried his hand to take his team cross the line, but unfortunately he got run out and walked back after a quick 10-ball 16 knock.

With 13 required off 7 deliveries and tailanders on crease, Asitha Fernando did the unthinkable in the final moments of the game by smashing 2 fours and a double to help Sri Lanka won the match and confirm their seat for the Super four stage.