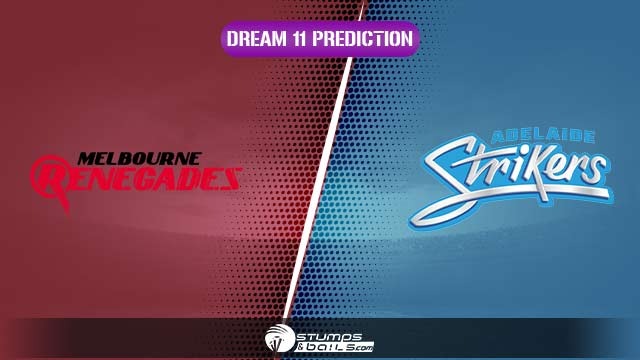 Melbourne Renegades and Adelaide Striker are ready to lock horns in the 54th match of the Big Bash League that will set the tone for the BBL finals at the Docklands Stadium in Melbourne on Tuesday.

Renegades were in good position to finish at third spot, but a defeat from the table-toppers Perth on Sunday, weakened their chances.

They, however still end it up at third if they managed to win this game and Brisbane lose their last to Hobart on Wednesday.

Adelaide Strikers, on the other hand, who started the tournament with 3 consecutive wins, lost their way in between and won just 2 out of their next 10, standing on verge of getting out of the tournament, a win in this game can provide them some relief to remain in contention.

The game between Melbourne Renegades vs Adelaide Strikers will be telecasted on Sony Sports Network. The live streaming of the REN vs STR will be available to watch Sonyliv app.

Where can I see REN vs STR Live Score?

As there is assistance for both batsmen and bowlers, this pitch has proved a suitable track for T20 matches.

According to the forecast, overall there are no chances of rain, as the weather will remain clear and fans can witness an interruption free Big Bash game Melbourne Renegades vs Adelaide Strikers.

There is no major update of injury from team Melbourne Renegades, and they will play to their full potential.

Strikers have to win this game at any costs to remain in contention, and they will try to play with their full-strength team.

The momentum is on Renegades’ side, who lost their previous game, but Strikers also in search of a victory will try their best to win this game.

The veteran played a brilliant knock of 54 off 34 in last game while opening the innings and will look to play in a similar fashion in important match against Strikers.

The in-form all-rounder is the highest run-scorer in the league with 458 in 13 games.

Henry Thorton has bagged 16 wickets in 9 BBL games and will try to recreate his magic in this important match too.

The highest run-scorer in the league with 458 runs in 13 games, is a perfect choice to pick as captain for your dream 11 team.

The in-form season batter, who has scored 355 runs in 13 matches, is an ideal pick as vice-captain for your dream 11 team.