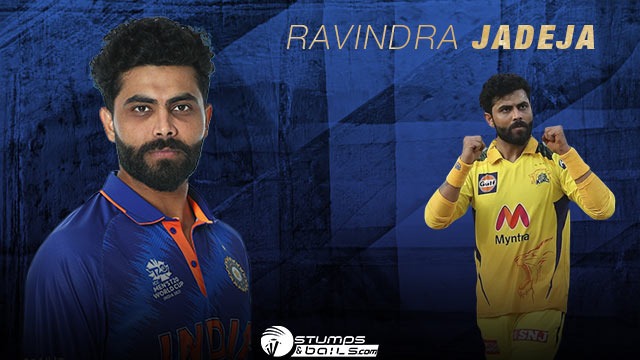 Ravindrasinh Anirudhsinh Jadeja was born on 6 December 1988 in Navagam Ghed, Gujarat. Popularly known as “Ravindra Jadeja”, this left-arm Indian all-rounder bowls slow left-arm orthodox. Since the beginning, he is wildly popular for his fielding skills. For many years, Jadeja has been an integral part of the Indian team in all three formats. He brings a lot of balance to the national side. In the Indian Premier League, Ravindra Jadeja plays for Chennai Super Kings. Recently, he has been appointed as the captain of the second most successful side of IPL, Chennai Super Kings.

In the early days, Ravindra Jadeja’s father’s dream for his son was to join Army. However, Jadeja accomplished his father’s dream to serve his country in his own way. His family was used to living in a one-room flat. Jadeja was too much involved in cricket even before the age of 10. Mahendrasinh Chauhan was a small-time cricketer who used to coach young kids at a place called Cricket Bungalow. Jadeja somehow managed to get into it. Back then he started as a fast bowler but later switched to left-arm spin after the instructions of Chauhan. Jadeja started playing many age-level tournaments and started making his impact over the years.

He made his first-class debut playing for West Zone in the 2006-07 Duleep Trophy. Then, in the same year, he started playing for Saurashtra in Ranji Trophy.

Jadeda was the vice-captain of the Under-19 World Cup-winning team in 2008 where he took 10 wickets in 6 matches and played a crucial role for his team.

In the 2008-09 Ranji season, Jadeja showed his strong all-round skills and ended up the season with 42 wickets and 739 runs.

After Jadeja’s magnificent performance in the 2008-09 Ranji trophy, he caught the attention of national selectors. He was picked up for the ODI series in Sri Lanka.

Ravindra Jadeja made his international debut in an ODI against Sri Lanka on 8 February 2009 and scored 60 runs in the match. Two days later on 10th February, he made his debut in T20I for the national side.

With some good knocks in his bag, he was selected in the squad for the 2009 World T20 where he failed to impress by giving some average performances. Due to the need for a good all-rounder in the team, Jadeja maintained his place on the team.

In 2009, Jadeja received his first Man of the Match award for taking 4 wickets against Sri Lanka.

He was in and out of the team for a long run. He made a comeback in an ODI against England where he scored 78 runs and helped India to reach a respectable total of 234/7 from 58/5 at one time. He also took 2 wickets in the match.

In the historic series win against Australia in 2013, Jadeja took 24 wickets in the series and also won the Man of the Match award in the final test of the series. He played a crucial role for the team in winning the ICC Champions trophy in 2013. With 12 wickets, he ended up as the highest wicket-taker in the tournament.

In 2014, Jadeja scored his maiden Test half-century. In 2015, due to some average performances, he got dropped from the ODI squad. However, he maintained his position in the test team.

In 2017, in the series against Australia, he bagged 25 wickets and scored 2 half-centuries for which he was rewarded with Man of the Series. In the same year, he was ranked 1 in the tests.

In 2019, Jadeja took his 200th wicket in tests. Since then, he has been a crucial part of a team in all formats.

Recently in March 2022, Jadeja scored 175 runs against Sri Lanka in a test and set a record for the highest runs by a Number 7 batter or below.

Ravindra Jadeja made his IPL debut in 2008 when he was bought by Rajasthan Royals. He played a crucial role in the victory of RR in the finals of 2008.

In the next season, he scored 295 runs for Rajasthan and bowled with a decent economy of 6.5.

In 2011, Jadeja was bought by Kochi Tuskers Kerala. After the termination of the franchise in 2012, he was bought by Chennai Super Kings for a whopping amount of 9.8 crores. Jadeja was the most expensive player of the season’s auction.

In 2019, Jadeja scored 37 runs in the last over by Harshal Patel against RCB, joint-most by any player.

In 2022, Jadeja was retained by CSK before the auction for the amount of 16 crores. In March, 2022 the franchise announced him as the new captain of the side replacing MS Dhoni.

In ODIs, Ravindra Jadeja has played 168 matches and scored 2411 runs with 13 half-centuries. He has taken 188 Wickets with the best bowling figure of 5/36.

In Tests, Jadeja has played 59 matches and scored 2396 runs with 2 centuries and 17 half-centuries. He has taken 242 wickets with the best bowling figure of 7/48.

· Only Indian bowler to be ranked No.1 in ODI after Anil Kumble.

· Most Expensive Player in 2012 IPL auction.

Ravindra Jadeja was born in a Gujarati Rajput family. His father Anirudhsinh Jadeja was a watchman in a private security agency while his mother Lata Jadeja was a housewife. His mother died in an accident in 2005. He has a sister Naina Jadeja who works as a nurse. Jadeja married Reeva Solanki in 2016 and they were blessed with a daughter in June 2017.

Ravindra Jadeja made his international debut in an ODI against Sri Lanka on 8 February 2009 and scored 60 runs in the match.

2. When did Jadeja got married?

Ravindra Jadeja got married to Reeva Solanki in 2016.

3. How many wickets Jadeja has taken in IPL?

Ravindra Jadeja has taken 127 wickets with the best bowling figure of 5/16.