On Day 3 at Southampton, India could only score 71 runs after losing six wickets. New Zealand’s breakthrough was Kylie Jamieson, who took five wickets for 31 runs. India scored 217, and New Zealand’s openers, Tom Latham and Devon Conway got the team off to a good start. Ravichandran Ashwin eventually ended the 70-run partnership between the two when he caught Tom Latham’s wicket for 30 runs. Southampton Weather Conditions day 4

Southampton Weather Conditions day 4 appears to be much worse than the past three days in terms of weather. The forecast predicts rain, which will be extremely disappointing for viewers who have waited a long time to see their favourite teams compete. The humidity would also be excessive, making things difficult for players – assuming play takes place at all. 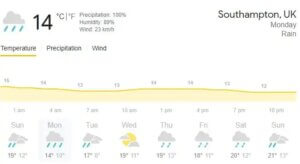 ICC  Intention will be to complete the game with a ‘RESERVE DAY’, If needed

If the game does not conclude within five days, it will be moved to the reserve day. Initially, the intention will be to complete the game in five days by adding some more overs to the action if the conditions are favourable. The reserve day will not take place if the overs are completed and the match ends in a draw. In that situation, both teams will be considered co-winners, and the prize money would be split evenly.

“In the event of time being lost during the match, the ICC match referee will regularly update the teams and media about the way in which the reserve day may be used. The final decision on whether the reserve day needs to be used will be announced at the scheduled start of the last hour on the fifth day,” an ICC statement said.