Quetta Gladiators can find themselves in the last spot of the PSL 2021 points table. They have managed to bag only one win in 5 games so far. They have a total of 2 points in their bank. Nevertheless, they will enter the clash against Zalmi with a win in their previous league game. As for Peshawar Zalmi, they are on the fourth spot on the points table. They have managed to clinch 3 wins in 6 games. They have a total of 6 points to their name. However, they have lost their last two encounters in the league. PSL fans can expect an interesting encounter on the weekend. 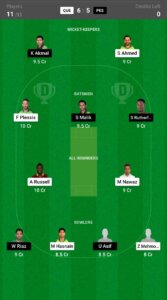 Our QUE vs PES Dream11 match prediction is that Peshawar Zalmi will win the match.