Peshawar Zalmi is currently on the second spot on the PSL 2021 points table. They have managed to grab six points from a total of five games. It will be their first match in the UAE today. As for the Lahore Qalandars, they are placed fourth in the points table. It will be their second game in the UAE. They will head into this game with a five-wicket win over Islamabad United. 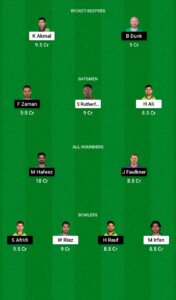 The Sheikh Zayed Stadium is known for it’s high-scoring games. The pitch favours the batsmen. The same can be expected in the clash between Zalmi and Qalandars on Thursday. Pacers can see some swing with the new bowl. Both the teams will want to field first.

Our PES vs LAH Dream11 match prediction is that Peshawar Zalmi will win the match.

Disclaimer: Please note that our Dream11 Predictions are based on our analysis and they do not promise fixed results.