The Royal Challengers Bangalore (RCB) will face some difficult questions in the upcoming season of IPL. One of them would be to decide the opening partner for Virat Kohli. Last year, Parthiv Patel opened with Kohli and he did leave a big impression. The left-handed batsman was one of Royal Challenger Bangalore’s few positives from their otherwise dismal campaign last year.

Last season, Parthiv Patel was promoted as the opening batsman of RCB and most of the time skipper Virat Kohli used to step down on the field with him as a part of the opening pair.

The Bangalore-based outfit finished the campaign with the wooden spoon after winning just five of their 14 league games. But unlike the team, Parthiv Patel was a consistent performer during the season. The former Chennai Super Kings and Mumbai Indians batsman finished his campaign with 373 runs to become the third-highest run-scorer for the team.

RCB is once again in a dilemma as to who their opening pair will be for the upcoming season as Devdutt Padikkal has been in wonderful form in the ongoing Syed Mushtaq Ali Trophy. The Karnataka opener has been one of the best performers in this tournament and is currently leading its run-scorers’ chart. In 10 games he has played so far, Padikkal has scored 461 runs, which included one century and four fifties.

Parthiv or Devdutt as the RCB openers for the upcoming IPL Season:

It looks like Royal Challengers Bangalore is confused as to who among  Parthiv and Padikkal should be their opener. Their latest Instagram post makes that pretty much clear. The franchise asked its fans on Instagram to choose either Parthiv or Padikkal as an opener. But in doing so, they came up with a match situation that made it sad for Parthiv.

We have to chase a target of 240. Virat has come out at the non-striker's end. Who will you pick to open the batting for us? #PlayBold

A post shared by Royal Challengers Bangalore (@royalchallengersbangalore) on Nov 28, 2019 at 12:19am PST

The franchise asked the fans who would prefer to open the innings alongside Virat Kohli if the target is 240. An unimpressed Parthiv then hilariously asked the franchise why do they want the team to concede as much as 239 in 20 overs. 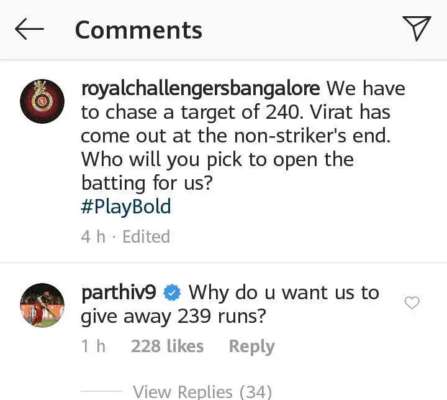