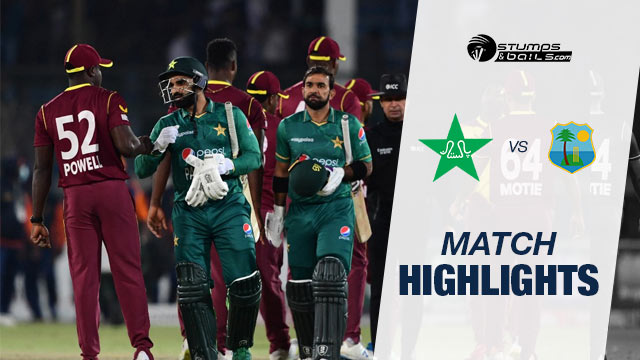 West Indies is touring Pakistan for a 3 match ODI series. The game one that was one of a kind and thrilling as it always happens between West Indies and Pakistan as the host team won the match by 5 wickets in the last over.

It was the West Indies team who had won the toss and elected to bat first. In the wake of Shai Hope’s 12th ODI century and him reaching a milestone of 4000 runs in ODIs, West Indies scored a good total in the first innings. His partnership with Brooks laid the groundwork for them to play the ball on its merits. The scoreboard was constantly ticking and no unnecessary risks were taken. Even against spinners, they squeezed them, and as Hope reached 70, he opened up. He soon hit his century, and despite Pakistan’s continued wicket-taking, West Indies crossed the 300-mark. Shepherd’s ardent strikes upped the total to 305 in the end.

Babar Azam’s typical century – his fourth in five innings – set Pakistan up for a seemingly simple chase of 306, but a middle-order hiccup allowed West Indies back in. In the end, it took a brilliant cameo from Khushdil Shah, who hammered four sixes en route to an unbeaten 23-ball 41, for Pakistan to win by five wickets and four balls. The West Indies fast bowlers, on the other hand, kept things tight on a Multan surface that didn’t appear to be allowing the ball to come on as freely in the evening, and it was all Pakistan could do for a while to avoid losing a bunch of wickets while waiting for the batting to get easier. West Indies carried the game to the final over after taking Shadab Khan’s wicket, but the damage Khushdil had inflicted was too much to recover from. With a six-over-the-long-on, Mohammad Nawaz sealed the victory, and Pakistan had survived a scare winning the match by 5 wickets.

After 14 years, cricket returned to Multan, and the spectators were greeted with a barrage of runs. Hope got a nice tonne, but it was overshadowed by another stupendous hundred from Babar Azam, the run machine. The Windies looked excellent with the bat and the ball but fell short at critical times. Khushdil also put up a strong performance near the finish to put the game solidly in the hosts’ favor.

We have set high standards for IPL: Sourav Ganguly on Birthday eve